Arestis and Sawyer on the EU fiscal compact 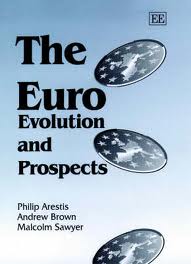 Philip Arestis and Malcolm Sawyer are guest blogging at TripleCrisis on the so-called fiscal compact. They say:


The European Leaders agreed in principle at their meeting in Brussels on the 8th/9th of December 2011 to adopt tougher sanctions on the euro area countries that break the ‘new’ rules of what used to be the Stability and Growth Pact (SGP), what is now called the ‘fiscal compact’ (FC). The FC requires that tax and spending plans be checked by European officials before national governments intervene. There will be automatic actions against those countries that are deemed to have budget deficits that are too large. In effect the new agreement tightens the rules of the old SGP, but with no apparent improvement, as the FC retains the principles of the previous SGP but with the one addition that breaking the deficit rules may actually be punished in some way.

Read the rest here. Also read Tom Palley's take on the role of the ECB in the crisis here.
By Matias Vernengo - December 12, 2011