In a recent post I promised to develop the critique of the dominant trade model, the so-called Heckscher-Ohlin-Samuelson (HOS) theory. While the Ricardian concept of comparative advantage is based on the labor theory of value (and is compatible with modern versions of that theory, as developed by Sraffa), and its results hold if the assumptions are realistic (limited capital mobility, and a fixed level of employment, the latter could result from domestic demand policies), the HOS is an application of the marginalist theory of value and distribution and it suffers from that theory's inconsistencies.

The HOS theory says that a country exports the goods that are intensive in the use of the factor of production that is abundant in the country. A country with lots of workers, and according to theory cheap labor, would produce goods that are labor intensive and export them, while importing capital intensive goods. The graph below illustrates the argument. 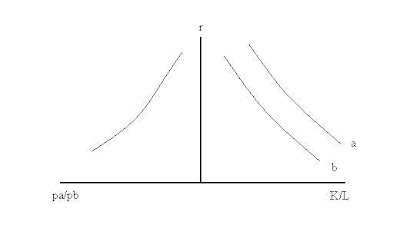 The capital controversy showed that there is no reason, in a world with multiple capital goods, to have a monotonic decreasing relation between capital intensity and the remuneration of capital. One way in which that effect could be represented would be with a capital intensity reversal in the production of goods a and b, as shown below.

In that case, as the intensity of capital increases (K/L goes up) at first, as before, a is the capital intensive good, but now there is a switch and b becomes the capital intensive good at lower rates of interest. The consequence is that for a part of the process as the capital-labor ratio increases the price of a with respect to b increases, but after the switch, the other part of the process, it decreases. The relative abundance of capital and labor is not a guide for relative prices anymore, and as a result, neither can it determine patterns of specialization. 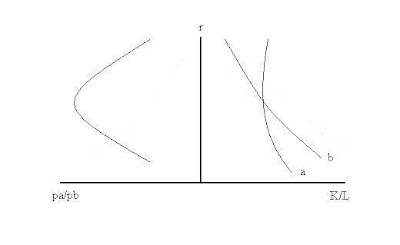 As a result, it is not generally true that trade depends on comparative advantage based on relative scarcities of factors of production. This suggests (as the critique of the Ricardian version of the model) that absolute advantage, lower costs, might be more important than conventional wisdom suggests. Also, it implies that history and institutions are central to understand patterns of trade specialization.

The seminal work in this area was done by Ian Steedman, extending the ideas of Sraffa to foreign trade. The classic papers have been collected in Steedman's edited book Fundamental Issues in Trade Theory.