Historians and the surplus approach

An interesting feature of the literature in history, particularly when related to ancient history, is that ideas that are clearly in the tradition of classical political economy, that is the developments from William Petty to Marx including mainly, but not uniquely Quesnay, Smith and Ricardo, are often used in contrast with the dominant supply and demand approach of the literature in economics. The typical discussion of development presumes that it was the surplus obtained with the domestication of plants and animals, and the transition from hunter/gatherer to agricultural societies, that allowed specialization (the division of labor) and the development of social classes.

The figure below comes from William McNeill's classic The Rise of the West, and the essential concept of surplus is at the center of the stage. 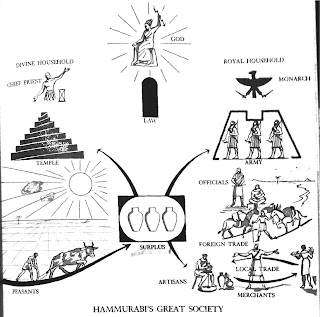 In that sense, historians, contrary to economists (even economic historians) do not tend to fall into the trap of describing markets as autonomous institutions that are disconnected from society. Also, historians tend to think in terms of classes, and restrict individual behavior to the kinds of actions that are related to the underlying social class. That is true in several popular books like Jared Diamond's Guns, Germs and Steel.
By Matias Vernengo - October 26, 2011