The Colombia FTA: Only Corporations Win 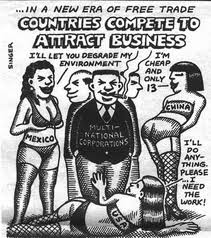 Trade has been a contentious issue in U.S. politics for a very long while. In recent times, free trade agreements have been promoted as essential by the cheerleaders of globalization, and as a threat to good jobs with decent wages and benefits by those who are skeptical about the advantages of the global economy. President Obama, a man of broad views, seems to represent both opinions. On February 12, 2008, candidate Obama made the following argument on this issue:

“It’s a game where trade deals like NAFTA ship jobs overseas and force parents to compete with their teenagers to work for minimum wage at Wal-Mart. That’s what happens when the American worker doesn’t have a voice at the negotiating table, when leaders change their positions on trade with the politics of the moment, and that’s why we need a President who will listen to Main Street—not just Wall Street; a President who will stand with workers not just when it’s easy, but when it’s hard.”

The previous year, Senator Obama had opposed trade deals with Colombia, Panama, and South Korea, while favoring one with Peru. Facing several critics, even before he won the nomination, Obama clarified that he did not intend to unilaterally revise NAFTA, but would be favorable to having a dialogue about the costs of free trade agreements (FTAs). Once in office, however, Obama seems to have made a 180-degree turn.