Manufacturing jobs have declined precipitously in the United States since the late 1960s. As the graph below shows they fell from 28% of total employment to 10% last year. The decline is continuous, and, one should add, precedes NAFTA and other Free Trade Agreements, (FTAs) which are often associated with the process of deindustrialization in the US. That the topic is old should be highlighted by the fact that the classic on the subject is Barry Bluestone and Bennett Harrison’s book published in 1982. 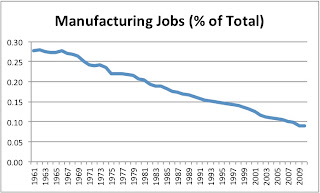 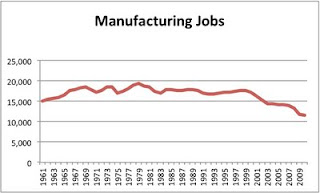 However, after 2001 (the year China entered into the World Trade Organization, WTO) manufacturing jobs collapse, with only 11.5 million jobs in 2010. This may suggest that, in part, one may have to revise Bob Rowthorn’s view that North-South trade has no role to play in deindustrialization. But clearly the process that starts in 1979 is of a different nature. One view is that it represents a natural result of economic maturity, and that faster growth in manufacturing implies more workers absorbed in the services sector.

I would suggest, but not elaborate too much here, that deindustrialization in the United States, and I mean the post-1979 phenomenon, is part of a strategy of accumulation, which was based on lower wages and higher interest rates, with demand pushed by increasing the debt leverage of the private sector (as suggested in another post). The weakening of the unions (and FTAs have played a role in this), and the move of manufacturing jobs abroad (mostly to Asia), and, as a result, deindustrialization, are part of the pattern of accumulation since the 1980s. However, this should not be read as a general weakness of the United States industrial sector.

As noted by Fred Block, the United States has a shadow industrial policy machine, that has allowed certain sectors to be weakened, but has promoted vigorously other sectors deemed strategic.  For him:

Block argues that there is a hidden developmental State in the US. In that sense, deindustrialization has not been a sign of the weakness of the US, or of the demise of its hegemonic power, as some on the left would argue. On the contrary, is part of the renewed American Hegemony, which has been maintained at the cost of certain sectors, and, in particular, of its working class.
By Matias Vernengo - May 16, 2011