It's not the size, but how you use it: A note on the debt-ceiling limit 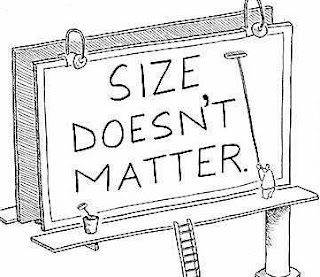 When we hit the limit, federal public debt will be slightly below the 100% mark. Historically, is not the highest debt-to-GDP level in the US, neither unprecedented by historical standards. The graph below shows British debt-to-GDP from 1692 to 2011. 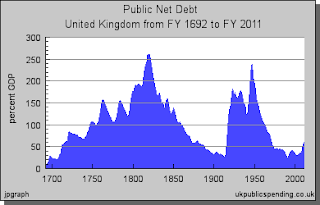 The peak in British debt, at the end of the Napoleonic wars, was about 260%, and it had grown consistently during the 18th century. David Hume argued in 1752 that: “either the Nation must destroy public credit, or public credit will destroy the Nation.” He was obviously wrong (that’s probably why his theories are still taught by economists!). Not only public debt, which is what he meant by public credit, did not bankrupt the UK, but also it allowed for an Industrial Revolution and the victory in the hegemonic wars against France. A pile of debt laid the foundations for the Victorian economy boom and world dominance.

Note that during the 18th century the UK had higher taxes to pay for the higher debt levels than France, but interest rates were considerably lower, which implied that the burden of debt (interest payments out of total spending) was not much bigger than in France. James MacDonald has a very good book on the British debt history.

This suggests that more important than the growing debt-to-GDP ratio in the US is how it is used, and how it is funded. The function of the deficits and debt is more important than the size, as Abba Lerner argued. Hence, if we spend money to create jobs (e.g. remaking the infrastructure) and tax the rich rather then cut spending on programs for the poor, increasing the debt-ceiling limit should be a no-brainer.
By Matias Vernengo - April 11, 2011