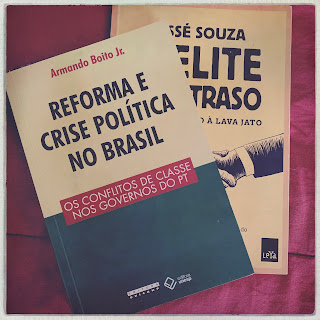 The issue of class conflict and its relation to accumulation of capital was central for classical political economists of the surplus approach. That tradition has survived in political science mostly through the work of Marxist authors. And in many recent discussions of the Brazilian crisis, that started with the 2013 protests, the 2015 turn in economic policy, the 2016 mediatic/parliamentary coup against Dilma, and the 2018 unlawful jailing of Lula and fraudulent elections of Bolsonaro, the theme of class and the role of the bourgeoisie has been widely discussed.

The book by Armando Boito Jr. (pictured above) is, perhaps, the best of those that analyze the role of class alliances and the anti-PT (anti-Workers' Party) backlash that led to the Brazilian economic collapse. The main argument is that PT had built an alliance with what he calls, following Poulantzas, the internal bourgeoisie, in particular after the fall of Palocci and the rise of Mantega in the Finance Ministry, and that this alliance fell apart in the end of the first Dilma administration. This internal bourgeoisie included many of the industrialist connected with the construction sector, the agro-business and the metal-mechanic complex, and was dependent on the internal market, while the external bourgeoisie, more favorable to the neoliberal policies of Fernando Henrique Cardoso and his social democratic opposition party (PSDB), was connected to financial markets and the international economy.

The reasons for the collapse of PT's coalition are complex, but essentially tied to the change in economic policies in 2011, the now infamous New Economic Matrix, referred to as the FIESP Agenda, by Laura Carvalho, in her useful book Valsa Brasileira, that promoted lower interest rates, a more depreciated currency, and tax incentives, rather than vigorous public investment in infrastructure, as the main tool for economic expansion. This was then exacerbated after Dilma's narrow win in 2014, when in 2015 she did a volta face on election promises and started a fiscal adjustment program.

As we discussed here before, the protests in Brazil started earlier, in 2013, and they came essentially from the left, with complaints about public transportation costs in São Paulo. But by 2015 the protests were clearly of a different nature. They were less about economic conditions, and more about corruption and the middle class was prominent among the protesters hitting pots (paneleiros) against the Workers' Party administration. In Boito's story is the break up of the coalition, and the abandonment of the Workers' Party by the internal bourgeoisie that marks the beginning of the crisis. In part, it seems, by the failure of the economic agenda (the FIESP Agenda, here this name is more revealing, since it marks that it was connected with industrialist interests) would be central for this.

Note that the policy turn precedes the protests. Note also that the complete turn in the economic policy, with the prioritization of austerity follows the electoral victory in 2014, and the nomination of Joaquim Levy to the Finance Ministry in 2015, arguably hoping to conciliate with a very hostile opposition that was vowing not to accept the electoral results the following day after the election (the defeated candidate, Aécio Neves, said so in the Senate in so many words). In many ways, like Vivek Chibber argued more generally about the State-led developmental phase, it is the national bourgeoisie that becomes the main constraint on growth.

While for the most part I agree with this analysis, I am not completely convinced about the break between a National or Internal bourgeoisie that is more industrialist, and an International or Neoliberal branch of the elites that is more financial, which is at the center of Boito's argument. For one, the differences between the internal and a more international one, and the industrial and financial one are less clear than suggested. The subdivisions might be exaggerated. Boito is careful and notes that FIESP supported both the more monetarist groups around Palocci, and also the Neo-Developmentalist groups linked to Mantega. A finger in every pie, so to speak. And that's a general problem with similar discussions within Marxism, and the whole division of financial capital and industrial capital. At the end of the day, capital is fungible, and even though one might have particular groups concentrated in one or other sector, it is relatively easy to diversify and move from one to the other. Jessé de Souza's book, also pictured above, provides a more direct critique of the role of the elites as a block (I have my issues with some of his critiques of certain Brazilian social scientists, but that's probably something for another post.

Boito, also, perceptively notes the role of the middle class. He does not emphasize it, but notes that it was particularly important in the use of the juridical system as a political element to bring down the Workers' Party. The prosecutors and the judges of the Car Wash (Lava-Jato), now increasingly less credible with all the revelations of abuse of power in their investigations as shown by The Intercept, are members of what he calls the upper middle class. I should note here the role of the United States, which trained some of these bureaucrats, including Sérgio Moro, then judge, not Attorney General of the Bolsonaro administration. Not just an elite that was committed to maintaining a backward system, the Elite of Backwardness in a possible translation of Jessé de Souza's expression, but a middle class of backwardness.

I see a parallel, with many caveats of course, to what happened in Chile with Allende. In that case, it seems that the causes for the demise of the state-led accumulation regime, as much as the retraction of the Keynesian welfare state in the advanced countries during that period, was related to its political limitations and what has been termed the Revolt of the Elites, by Christopher Lasch. In the Chilean case, the ideas of the so-called Chicago Boys were initially rejected even by the Conservative Party, and there was a significant consensus in society about the need to expand the welfare state. For example, the nationalization of copper, which had started during the Christian Democratic government of Frey, was passed in Congress with support not just from left-of-centre parties but also with support from centrist parties. In some respects, the Chicago Boys, with their ideas about liberalization and privatization, acted as a Leninist revolutionary vanguard.

In part, this was possible because the success of the state-led industrialization had created a middle class and an incipient industrial bourgeoisie that was susceptible to the fears of a communist takeover and was willing to support a violent coup to repress class conflict. It was the reaction to the political changes of the state-led industrialization period that increasingly led to the incorporation of marginal sectors of society that created the conditions for the neoliberal turn. Fears that were stoked by the United States, which provided support for the coup. In similar fashion, the success of the Workers' Party (sure there were mistakes in economic policy, but overall the economy grew, and inequality was reduced), and the improvement of the conditions in the bottom created sufficient fears in the upper and middle classes to provide support for a coup. And again the US seems to have played a role, now using other methods, with lawfare at the center of the strategy.

PS: If you want to know more about Brazil just click on the label below, and organize by date. There are posts going back to the beginning of the crisis in 2013.
By Matias Vernengo - August 06, 2019