The return of populism or Argentina on the verge of collapse

The Argentinean primary elections, which are very peculiar and take place all at once with all parties, were last Sunday. The primaries made some sense when the Peronist party was all divided and that allowed the main candidate to proceed, but with the move of Cristina Kirchner to the vice-presidential spot next to Alberto Fernández, and the unification of a good part of Peronism (in particular Sergio Massa), the primaries become essentially an anticipated election. And Peronism won resoundingly, with 47 percent of the votes, considerably more than the 32 percent the neoliberal Mauricio Macri obtained.

After the election there was a run on the peso, with a depreciation of almost 30 percent, and no significant intervention from the Central Bank. To add to the problems, Macri, the incumbent president, blamed the run on the voters.  In his view, they basically do not know how to vote, and by bringing back the spectrum of populism, and the implication was default, they scared the markets. It's all about confidence. 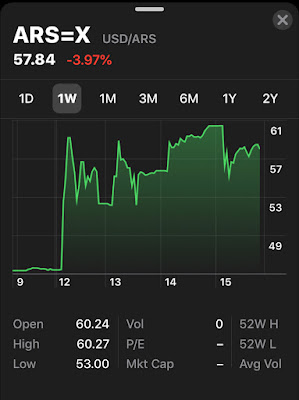 There are many problems with his arguments, and the policies he proposed the following they, after he apologized (after all he still needs the votes of those that do not know how to vote in October, when the actual election takes place). First and foremost, the fact that the problems faced by this government are the result of their own decisions to increase significantly the amount of debt in foreign currency. As I noted before here, it doubled in this government, after having being significantly reduced in the previous one (and after the renegotiation of debt with 93 percent of bondholders in 2005 and 2010; I must insist that default was in 2002, before Kirchner, in spite of what the Wall Street Journal said recently).

Yes, it is true that by the time Macri was elected in 2015 the country had an external problem. Meaning that the current account was moderately negative, and there were no inflows of capital in a world awash in capital, and reserves were low. But most countries were able to attract flows with moderately higher rates than the international ones. I expected the depreciation and higher inflation in the beginning of Macri's government to bring down real wages. And fiscal adjustment was to be expected too, in order to increase unemployment and reduce the bargaining power of unions.

But he had space, after that, for borrowing in international markets in domestic currency, at higher interest rates, and in domestic markets, and he could have in the process obtained significant amount of dollars (locals buying high paying bonds in domestic currency) to prop up the reserves. That would have led to growth, possible stabilization of prices (with some appreciation of the currency), and accumulation of reserves, reducing the external vulnerability of the economy. The fact that they borrowed in dollars, allowed the depreciation of the currency, losing control of inflation, increased the obligations in foreign currency to a level that an agreement with the IMF was necessary, and that adjustment forced the recession (besides the contractionary effect of the devaluation) was unexpected, to say the least. It is almost impossible to fathom why he would pursue policies that would make his reelection very difficult.

To things should be said in this context. One is that the agreement with the IMF supposedly was in place to allow to maintain the exchange rate in the forty something level, and with that, perhaps, at least not accelerate inflation and help with reelection. A politicization of the IMF that the international organism should have resisted. Also, many people able to buy dollars at forty something (now that they are at around sixty) won significantly. So those that bet on a depreciation (and promoted capital flight) won. And financial markets certainly did. This government has many friends in the markets. The other is that the agreement with the IMF ties the hands of the next government. And in my view that's no accident.

The measures he announced to counter the crisis (see this FT story), essentially "increases in the minimum wage, loans for small and medium-sized businesses, student grants, subsidies for poor families with children and a floor for income tax, as well as a freeze on petrol prices" (the later freeze was, apparently, now eliminated) will not have an economic, and most likely also not an electoral effect. FT is correct, it's too little too late. Not only the size of the measures is small, but also the inflationary and contractionary effects of this massive depreciation will dwarf any possible benefit of a moderate stimulus.

So Fernández is the virtual new president, and Cristina his vice-president. And the left of center is most likely back in power in Argentina. The notion that the left was done in the region has been exaggerated. As I noted more than three years ago here it was a stretch to think that most people wanted a return of neoliberal policies in the region. I noted that Brazil was divided, and I think still is, with significant resistance to Bolsonaro, and that Macri had only won by a very a narrow margin. Note that the return of the left in Argentina comes with significantly less degrees of freedom than in 2003. Not only there's an IMF agreement that would need to be renegotiated (and they must do it to avoid a default), but also the international scenario is much less favorable. But my take is that the new government will be able to avoid default, and restore some degree of coherence to economic management, allowing for lower inflation, and moderate rates of growth (on the low end, but at least growth) and reduction of unemployment and poverty. More on that in another post the near future.
By Matias Vernengo - August 15, 2019