The IMF Program in Ecuador: A New Report by Mark Weisbrot 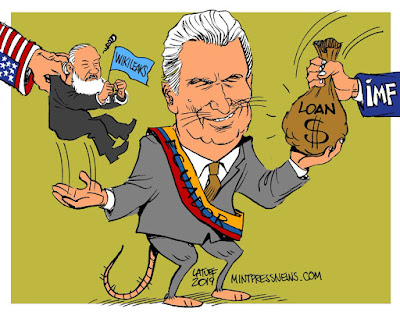 As they discuss the new candidate for the International Monetary Fund (IMF), and it seems that the lead candidate for Lagarde's position is the former Dutch finance minister Jeroen Dijsselbloem, a pro-austerity member of the Labor Party (which I guess is at least nominally on the left), it is worth reading the new CEPR report on the possible effects of IMF programs in Latin America, more specifically the one in Ecuador, now that the country has been brought back into the fold of well-behaved nations (after expelling Assange from their London embassy, in the post-Correa period).


This report examines Ecuador's March 2019 agreement with the International Monetary Fund (IMF) and finds that Ecuador is likely to have lower GDP per capita, higher unemployment, and increased macroeconomic instability under the program. Even the program itself, the authors note, projects Ecuador to have a recession this year and increased unemployment for each of the first three years of the program. But these projections are optimistic, the report concludes. [Full report here]

I'll have more on the IMF and Argentina soon. Also, something on Brazil, for those interested in the situation in Latin America.
By Matias Vernengo - July 22, 2019