Classic Paper by Arestis & Eichner: "The Post-Keynesian and Institutionalist Theory of Money and Credit" 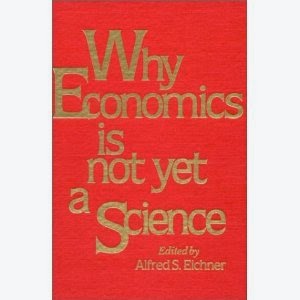 Recently, (see here) Matias posted a link to Fred Lee's collection of a classic set of by papers by the late Alfred S. Eichner. He mentioned that this not a complete set of Eichner's remarkable work, and that there are plenty of other exceptional pieces; in particular is Eichner's paper with Philip Arestis: "The Post-Keynesian and Institutionalist Theory of Money and Credit." This work has influenced my research tremendously (especially concerning the authors adherence to the tradition of Veblenian Institutionalism, and their emphasis of an 'open-systems' approach to political economy).

From the Introduction (which is worth quoting at length):

The emphasis in post-Keynesian and institutionalist monetary theory is on the proposition that "Monetary economics cannot help being institutional economics" [Minsky 1982, p. 280] and that "Capitalism is a monetary economy" [Dilland 1987, p. 1641]. In this view money capital is an institution that is inseparable from the other institutions that comprise economic systems. Money is not merely a medium of exchange. It is tightly linked to the behavior of the enterprise sector and the economy as a whole. Therefore, the basic theme in this approach is inevitably, "The Monetary Theory of Production" [Keynes 1973; Veblen 1964]. It is in fact this Veblenian/Keynesian premise that constitutes the core of what we have labelled in this study "the post- Keynesian and institutionalist theory of money and credit."

In this monetary theory of production, it is not surprising to find that credit rather than money is the mechanism that enables spending units to bridge any gap between their desired level of spending and the current rate of cash inflow. Money is viewed as essentially endogenous in a credit-based economy, responding to changes in the behavior of economic entities, rather than being subject to the control of the monetary
authorities. Money, in this view, is an output of the system, with the endogenous response by the financial sector governed by the borrowing needs of firms, households, and the government. Once it is recognized that money is credit-driven and therefore endogenously determined, any money creation emanating from fiscal or debt management operations initiated by the authorities or from a favorable balance of payments, can be neutralized through an equivalent reduction in commercial bank credit brought about by the actions of private economic agents.' It clearly follows that government may not be able to create money directly (see, however, Chick [1986]).

What it can do, instead, is redistribute money among different groups of economic agents. This can happen when governments, in their attempt to increase/reduce the stock of money, set in motion the process whereby bank credit is created/destroyed by groups of economic agents. To the extent that the latter groups are different from those initially receiving/destroying money following the government's initiatives, redistribution of money between those groups takes place.

The endogenous nature of money and credit is further elaborated upon in the next section with the constituent elements of the model under discussion being brought together in the section that follows. It is precisely here that the openness of economic systems is emphasized and its implications for the post-Keynesian and institutionalist theory of money and credit are compared with the neoclassical view. A final section summarizes the argument.