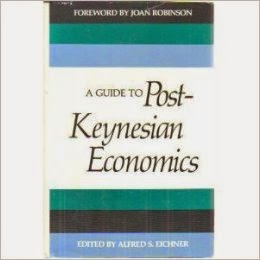 Have been posted by Fred Lee and are available here. These are not a complete set of papers and books by Eichner, and I assume that they are the ones that are part of Fred's collection. Still worth checking out.

Below the text of the New York Times obituary (the pdf of the article here). Eichner had been a student of Eli Ginzberg, who was in turn a student of Wesley Mitchell and John Maurice Clark (his not too kind comments on his teachers here), and was the link to the institutionalist tradition.

Alfred S. Eichner, a leading member of the post-Keynesian school of economics and a professor at Rutgers University, died of a heart attack Wednesday in Closter, N.J., where he lived. He was 50 years old.

Dr. Eichner suffered the attack while playing racquetball. He was pronounced dead at Pascack Valley Hospital in Westwood.

A native of Washington, he was a graduate of Columbia College and received his doctorate in economics from Columbia, where he taught from 1962 until 1971. He headed the economics department at the State University of New York in Purchase from 1971 to 1980 and joined the Rutgers faculty the following year.

Dr. Eichner edited several books, including ''A Guide to Post-Keynesian Economics'' and ''Why Economics Is Not Yet a Science,'' both published in 1983 by M. E. Sharpe. His latest book, ''The Macrodynamics of Advanced Market Economies,'' is to be published this year, also by M. E. Sharpe.

One of the Best Teachers

He was a member of the editorial board of the Journal of Post-Keynsian Economics and he lectured widely and testified before Congressional and other legislative committees.

With Eli Ginsberg, a professor of economics at Columbia, Dr. Eichner wrote an economic history of black Americans, ''The Troublesome Presence: The American Democracy and the Negro,'' published in 1964 by Free Press. Dr. Ginsberg recalled Dr. Eichner this week as ''a first-rate historian and one of the best teachers'' of economics.

As a leader of the post-Keynesian school, a small but influential group of economists in Britain and the United States, Dr. Eichner sought to go beyond the theories of John Maynard Keynes, who advocated government intervention in the free market and public spending to increase employment.

In the view of Dr. Eichner and his colleagues, investment is the key to economic expansion. He advocated a government incomes policy to prevent inflationary wage and price settlements as an adjunct to the customary fiscal and monetary means of regulating the economy.

Dr. Eichner is survived by his wife, Barbara; their sons, Matthew and James, both of Closter; two brothers, Martin, of Palo Alto, Calif., and Stanley, of Boston, and a sister, Belle Joyce Kass of Chicago.

There is more interesting stuff in Fred's page here.