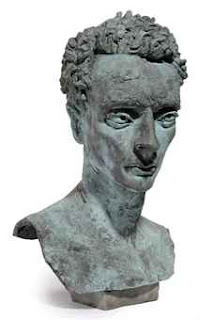 Yes, that's Wynne's bust.
﻿
Economists are well known for having predicted nine of the last five recessions.  Or so goes the joke.  The fact that economists cannot predict and that forecasters are always wrong is not new, and I would suggest less important than often understood.  The problem is not so much that economists cannot predict particular events, but that the dominant theory is an ineffective tool for understanding real economies. And that is true for both the New Classical/Real business Cycle types that believe that markets are efficient immediately, or the imperfectionist New Keynesian, that think that they are too, but only in the long run (this view should lead you to believe that the main solution is to reduce imperfections). As a result, the mainstream always provides unreasonable predictions.

But let me give an example of what I mean. Rudiger Dornbusch was a well respected mainstream economist.  He said back in 1999 that the euro would:


"reinforce financial deregulation (national and cross border) in to create a broad and deep capital market. comes from a dinky and segmented national, bank-based financial structure. It is on the way to a US-style capital market where households hold funds and companies issue paper and stocks, intermediation margins are small and governance significant. European companies will benefit from the transformation, the most significant supply side influence we will see. … the Euro is a thoroughly modern institution, well-adapted to a highly integrated and trigger-happy international capital market."

Not only deregulation was something good for , but also giving up the currency would allow for lower interest rates and higher growth.  For him:


"Having a national money is expensive … It offers little flexibility and year after year an interest cost is paid for what is the illusion of independence. … Monetary sovereignty nowadays means only the right to bad money.  How can the periphery get out of the self-inflicted historical curse of a central bank and a national money. Do what did ... Give up the national money and create a hard link to a world class currency."

It goes without saying that this does not sound like good advice these days.  And before you say that hindsight is always 20-20, I want to remind you that yes some people that were in favor of the European project actually saw the limitations of the euro.  The economists that did not believe in the efficiency of markets (at least not for allocating resources, including labor) argued that giving up a tool (like the exchange rate) would imply the need for other tools.  Here is Wynne Godley in 1992, about the project of a common currency for :


"It needs to be emphasised at the start that the establishment of a single currency in the EC would indeed bring to an end the sovereignty of its component nations and their power to take independent action on major issues. … the power to issue its own money, to make drafts on its own central bank, is the main thing which defines national independence. If a country gives up or loses this power, it acquires the status of a local authority or colony. Local authorities and regions obviously cannot devalue. But they also lose the power to finance deficits through money creation while other methods of raising finance are subject to central regulation. Nor can they change interest rates. As local authorities possess none of the instruments of macro-economic policy, their political choice is confined to relatively minor matters of emphasis – a bit more education here, a bit less infrastructure there."

And colonies are exactly what the countries of the European periphery have become.  And the options have been a lot less education, retirement, employment and infrastructure.  Further, Godley was concerned that the European project, that he supported, was incorrectly based on the notion:


"that economies are self-righting organisms which never under any circumstances need management at all ... It is a crude and extreme version of the view which for some time now has constituted Europe’s conventional wisdom … that governments are unable, and therefore should not try, to achieve any of the traditional goals of economic policy, such as growth and full employment."

Hence, sensible theory did allow, not to get the timing of the euro crisis (or wouldn't allow now to know exactly when is going to default), but to get reasonable understanding of how economies work, and to provide fitting advice.  Of course almost nobody got the message.
By Matias Vernengo - July 13, 2011