This was faster than even I expected (for my views on what Macri meant as soon as he was elected see this and for a more recent assessment go to this post). Let me first say that I don't think is quite like the 2001/02 crisis. It is unlikely that there will be a default anytime soon. The level of reserves is at about US$ 56 billion, and the IMF is happy to finance the very Neoliberal government of Macri (because the IMF has changed a lot, remember?).

The economy with Macri has not performed very well, as expected. Inflation has remained high, since the depreciation of the peso has persisted, and that was no accident. It allowed to erode real wages, which I noted from the beginning was part of their goals. Also, the rate of growth has been lackluster, and if the IMF is to be believed real GDP growth in his first two years was on average at around 0.5 percent. Again, I don't think that has been a central concern (even if they suggest the opposite). Note that again a relatively low rate of growth (as per Okun's Law) leads to slow job growth (formal unemployment is above Cristina Kirchner), and less wages pressures. In Argentina, economic policy is truly geared towards containing wage resistance, when you get a Neoliberal administration.

Macri's policies are essentially the same as the Neoliberal policies of Menem (and his finance minister Domingo Cavallo, who is back, and defending Macri), minus the fixed exchange rate system. The notion was that a flexible exchange rate with inflation targeting would basically provide the same price stability as Convertibility in the 1990s, without the balance of payments problems that led to the 2001-02 debacle. Btw, this idea that one could use either a very rigid or a very flexible exchange rate regime (but nothing in between, and certainly not capital controls) was really the exchange rate policy of the Washington Consensus and was made famous by Stan Fischer as the Bipolar Consensus.*

So Macri liberalized the foreign exchange market, further liberalized imports, in crucial sectors where there was a significant repressed consumption by the middle and upper classes, like electronics, and that led to a significant increase in imports, not matched by increases in exports (even with the depreciation of the peso; as it turns the depreciation of the currency is inflationary, and by reducing real wages, contractionary, but it does not increase exports by a lot, which depend on foreigners incomes for the most part; who could have foreseen such an effect!), and they resort to foreign borrowing to close the gap. Again using IMF numbers, that are estimated for 2017 (and I should note and not very reliable since inflation data is also not very good. A bit enervating given how much the opposition to the Kirchners complained about the quality of inflation data, and the notion that would not happen with them) we get the following picture for the current account (CA). 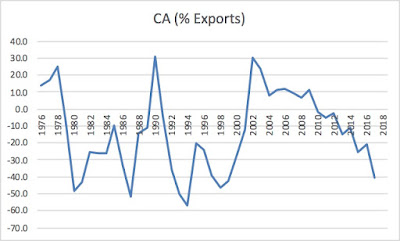 Clearly the external situation has worsened significantly. Don't get me wrong, I don't think the recent run on the peso has been caused directly by the CA position. This is more like the long term problem. If you liberalize imports, and the patterns of consumption are such that imports explode, but your pattern of specialization is the production of commodities, and you solve this by borrowing in foreign currency, it cannot end up very well. And it won't. Btw, yes I did say back in 2016 that foreign debt driven growth was dangerous and eventually unsustainable at the time that Moody's was upgrading Argentina. So what caused the recent run on the peso, you ask. Not sure, to be frank.

The Fed in the US has been signaling higher rates (and they went up a bit), and that causes trouble for sure. And the Macri team, which has some from the Menem/de la Rúa Neoliberal Era (like Sturzenegger at the Central Bank), is not very competent (not sure why FT thinks they are pragmatic and in between the Neoliberals of Menem and the 'heterodox' of the Kirchners), and kept interest rate really low (for distributive reasons alluded above) allowing for depreciation. At any rate, the turbulence might be temporary, but the issue is not, and Argentina is headed for more problems.

* On this John Williamson, and his views on competitive exchange rates, did not reflect well what the consensus in Washington (meaning the IMF, World Bank and the US Treasury) really thought.

PS: If you read Spanish, you must check this short piece by Fabián Amico and Mariano de Miguel (h/t Edurado Crespo). Best I've read so far.

PS2: Forgot this one by Claudio Scaletta in Página/12, also worth reading, as everything Claudio writes.
By Matias Vernengo - May 10, 2018