Mainly because of their "expectation that Argentina will settle holdout creditor claims which will result in a lifting of court injunctions and clear the way for Argentina to access international capital markets." Fair enough, access to capital markets would lift the balance of payments constraint, even if the agreement is a complete surrender to the Vultures demands. But the most interesting argument for the improvement in the credit rating is that it results from "economic policy improvements since the Macri administration took office last December." So what happened since December (btw, mostly what I said it would). 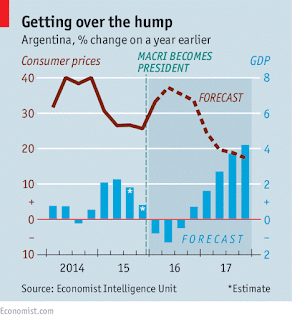 The figure above from The Economist shows that inflation went up, and the economy was thrown into a recession. Fiscal deficits will likely increase, in spite of spending cuts, and reduction in public employment, since with the recession revenue will fall (Moody's expects the deficit to be about 5% GDP).

And yes fiscal deficits in domestic currency are mostly irrelevant for the discussion of ability to pay foreign obligations in dollars (the only reason to care is if the deficits are caused by more spending, and lead to current account deficits, which do increase the needs for foreign currency, which is not the case in Argentina now). Actually, I also think that the economy will eventually improve (that was the plan all along), just in time for the next presidential election.

The problem of course is that growth will accelerate very likely with an increase in current account deficits, as much as it happened during the Menem years in the 1990s. A more depreciated currency will do very little to solve that problem, which will likely be possible because the government will push ahead with international borrowing. Foreign debt driven growth essentially. But we know what tends to happen with this kind of policy.

There is a long history of external debt cycles in the country. This kind of frivolous economic policies, that push short term political gains (Macri's reelection like Menem in the past) at the expense of sustainable policies (it's the current account, not the fiscal idiot!) is what should be termed populism. Current account populism that is.

PS: Moody's does not even say anything about Macri's name appearing in the Panama papers.
By Matias Vernengo - April 20, 2016