On Volcker and Peterson's debt problem 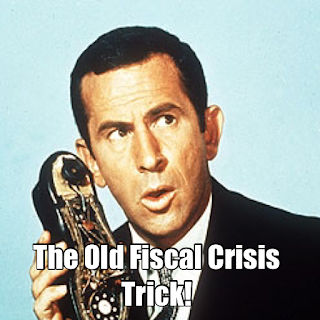 Yes, this country can handle the nearly $600 billion federal deficit estimated for 2016. But the deficit has grown sharply this year, and will keep the national debt at about 75 percent of the gross domestic product, a ratio not seen since 1950, after the budget ballooned during World War II.

The practical consequence of large deficits and debts, according to them is that:


Our current debt may be manageable at a time of unprecedentedly low interest rates. But if we let our debt grow, and interest rates normalize, the interest burden alone would choke our budget and squeeze out other essential spending. There would be no room for the infrastructure programs and the defense rebuilding that today have wide support.

It’s not just federal spending that would be squeezed. The projected rise in federal deficits would compete for funds in our capital markets and far outrun the private sector’s capacity to save, to finance industry and home purchases, and to invest abroad.

In other words, large deficits and debt will compete with funds for other activities, the savings glut which a good chunk of the profession thinks causes low interest rates will vanish, and this, in turn, will increase interest rates, which not only will increase the interest rate burden, but also will reduce the fiscal space to spend on things we agree are fine, like infrastructure.

What should we do according to them? No surprise here, cut social spending. In their words: "A realistic approach toward the major entitlement programs is required, given that they are projected to account for all of the growth of future noninterest spending." They fall short of asking for privatization of Social Security, but you can bet that this is what they are going to push for in a Clinton administration. To finish the work they started in the previous Clintocracy (the system of government in which a Clinton holds power).

I discussed fiscal issues several times here, and the problem in their argument is with basic principles really. Below Gross Federal Debt, which stands at slightly more than 100% of GDP, and once the amounts of public held by the Fed and in the Social Security Trust Fund and other government accounts are accounted for, then this leaves us with the Net debt of about the size reported by Volcker and Peterson in their piece. 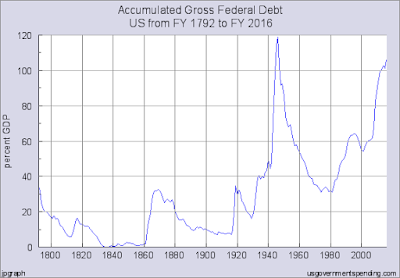 Looking at the figure you might be alarmed. It has increased significantly after the last crisis. However, there are important elements that suggest that the increase in public debt is not problematic. First of all, as noted by Dean Baker, the burden of debt service (interest payments) is tiny. And will most likely remain low, since the space for normalization of interest rates is much smaller than what Volcker and Peterson suggest. The idea that government spending will grow out of line with the ability to finance it (which has little to do with the "private's sector capacity to save," btw) is difficult to believe too. Note that government spending has been subdued as the graph below shows.

Government spending in real terms remains below the pre-crisis level, and after the fiscal package, Obama has essentially followed the Clintonomics rule book of fiscal conservatism. If anything spending is kind of small, for the needs of the economy (I would say spending, and not deficits, since the result is endogenous, but I agree in general terms with the argument here). There is no problem of runaway government spending, and certainly no danger, as Volcker and Peterson suggest that "we would risk returning with a vengeance to stagflation — the ugly combination of inflation and economic stagnation that we tasted in the 1970s" if we do not cut social spending. This is the old trick of creating fear of a fake fiscal crisis to force cuts on spending for social programs.

My fear is that Volcker and Peterson, and others like them, will have an outsized influence on a Clinton administration. The danger is not the high inflation of the 1970s, but the completion of the neoliberal project of the 1990s.
By Matias Vernengo - October 25, 2016