Foreign Exchange Trading and the Dollar

The new Bank for International Settlements (BIS) Triennial Central Bank Survey was published last month. The Foreign exchange turnover is down for the first time since they started in 1996. As the press release says: "Trading in FX markets averaged $5.1 trillion per day in April 2016. This is down from $5.4 trillion in April 2013." The figure below shows the main results. 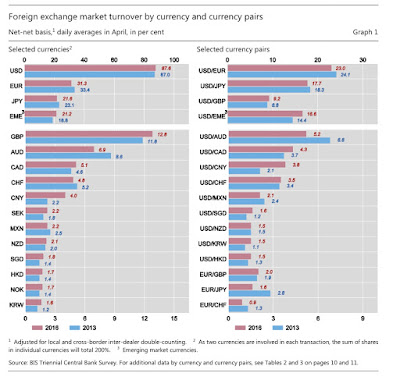 Not surprisingly the dollar remained the key vehicle currency, being on one side of around 88% of all trades, while the euro has continued to slide down approximately from 39% in 2010 to 31% now. Also, while the yuan or renminbi is now the most actively traded developing country currency, the rise in the share in global foreign exchange turnover is from 2.2% to 4%.

PS: For those interested here there is an old paper, but I think still relevant, on the dollar after the crisis, and why there should be no fear about its dominant position.
By Matias Vernengo - October 26, 2016