The persistence of low interest rates has dominated the news. In general related to whether the Fed will or will not increase the interest rate by the end of the year. The Economist tried a few weeks ago to put things in perspective, and suggested not only that the current nominal rates close to zero are unprecedented, but it sort of indicated that the negative real rates are also to some extent a new phenomenon. The explanations for low rates can be found here, and the consequences, according to The Economist here (btw, for them is a pension crisis; and yeah, just wait this will be used to call for privatization).

I'm not particular keen, as you know, on the idea of a savings glut, as an explanation for the low rates. The reason is much simpler and is associated to the fall out from the previous crisis. But at any rate I just wanted to check the data. They showed the nominal short term rate in the UK (below), which is not very different from what can be found in other sources used here before (like this one). 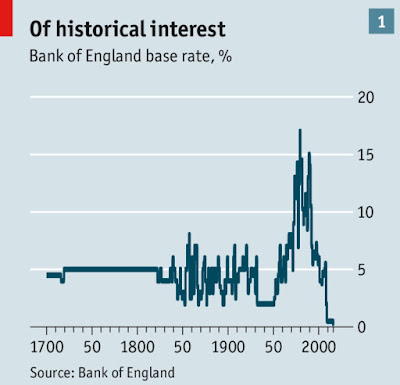 However, they only show the real rate for the last three decades or so (see below). This seems to suggest, even though is never quite stated, that the current trend, with lower real rates is also unprecedented. But that is not the case. 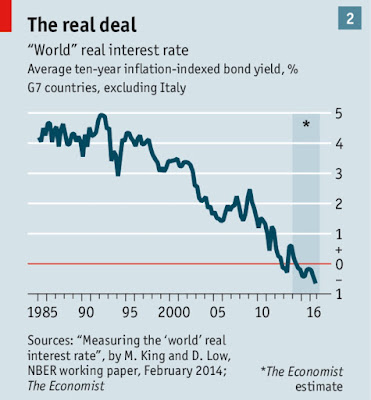 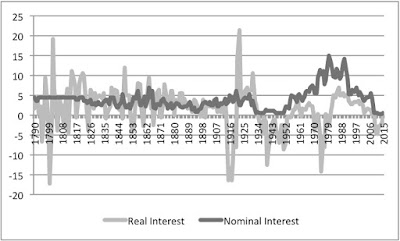 This seems to suggest to me that the explanation must be related to the short term nominal rate, which is a policy decision of the central bank, rather than something that affects the levels of inflation, and according to some theories (the loanable funds) what that does to savings. If I'm right then, the cause of the low rates is the financial excess of the last three decades, that forced central banks to keep rates low to save the economy, and preclude further problems. Very unlikely that would change any time soon.