Crowding out: what's the evidence?

Before the publication of Keynes' General Theory, most marginalist economists were against expansionary fiscal policy. It was believed that an increase in government spending would reduce by the same amount private spending, and, hence, it would have no effect on output and employment. Keynes referred to this as the Treasury View, since bureaucrats at the Treasury were prone to believe it. This has been known as crowding-out in more recent times.The evidence is not particularly forthcoming, as far as I can tell.

Amazingly, given the relevance of the topic for conservative ideas, and the fact that this is still the reason why the fear of deficits and debt is so pervasive, there is not much research on the effects of deficits on interest rates. Robert Murphy, on the Instructor's Resources for Mankiw's manual (funny that is NOT in the manual) says:


"Economists worry, therefore, that high deficits imply low levels of investment, leading ultimately to a lower capital stock and so lower living standards. It is, therefore, important to see if this prediction that high deficits lead to high interest rates is supported by the data. Like many empirical questions in economics, this one is difficult to answer unequivocally. Figure 1 shows a scatterplot of the real government deficit and the ex post real interest rate between 1960 and 2000. While there is some evidence of a positive association, it is not strong." 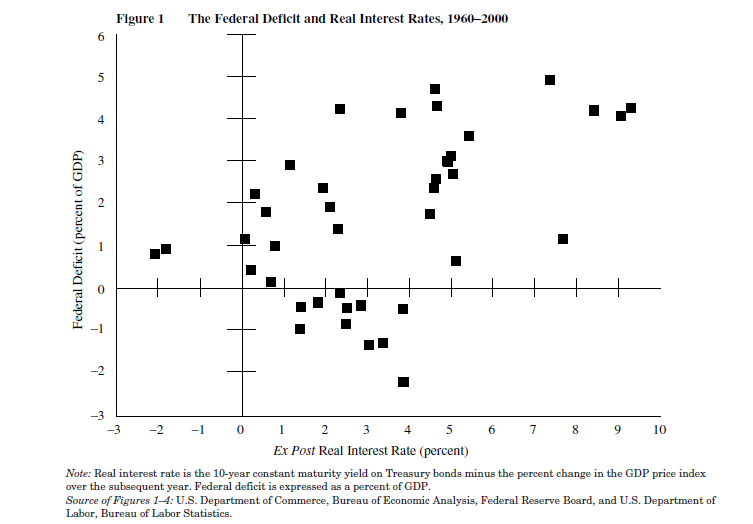 Updating the graph for 1962 to 2014, with CPI for deflating the rate of interest, I've got the following graph: 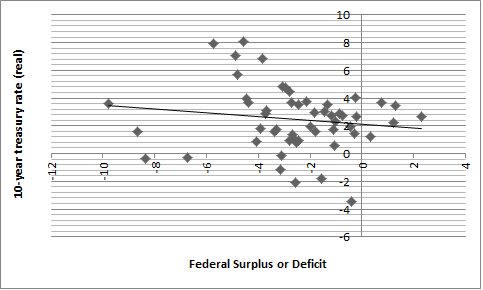 There is a very weak, and statistically insignificant relation between deficits and the real rate of interest (note that in mine deficits are negative). In my view, this suggests that there is no clear relation. Deficits do not seem to impact the rate of interest, and crowding out is not empirically relevant. There are plenty theoretical reasons for not believing in it too. And Ricardian Equivalence is NOT one of those. But that would be material for another post.

PS: The weak correlation remains even if one adjusts for outliers, by the way. So no there is nothing there, and that's why there isn't much in the mainstream published on this.
By Matias Vernengo - February 12, 2015

Email ThisBlogThis!Share to TwitterShare to FacebookShare to Pinterest
Labels: Crowding out, Deficit