More on Mandela and Inequality in South Africa

I discusses post-apartheid economic policy in a previous post. The Figure below from The Economist's Graphic Detail shows the evolution of average income by racial group during Mandela's life time. 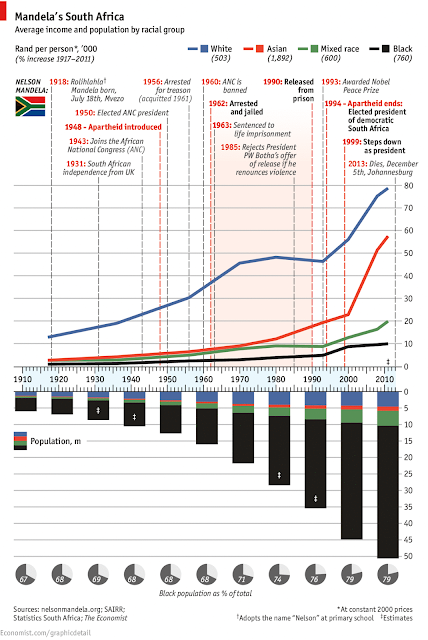 Note that inequality actually increases during Mandela and post-Mandela ANC governments. From The Economist.


Towards the end of Mandela's incarceration—through to the abolition of Apartheid—fortunes did reverse slightly, but by now the disparity had grown so large that it barely made a dent. Income growth improved substantially for all South Africans after his 1994 election victory, but sufficiently more so for whites, and the balance has been disproportionately weighted in their favour—and increasingly that of Asian South Africans—since he stepped down in 1999.

Under its own majority rule, the lot of the ever-growing black population—today forming over three-quarters of the national total—has been notably poor. Misguided governance, low-quality education, skills shortages and massive unemployment levels of around 40% have left it more disadvantaged today than when Nelson Mandela was still behind bars. Black income has virtually flat-lined, betraying tremendous gulfs between the wealth of the different racial groups. Sadly, the nation Mandela leaves behind today remains one of the least equal in the world.