Milton Friedman on economic development and the 'Brazilian Miracle' 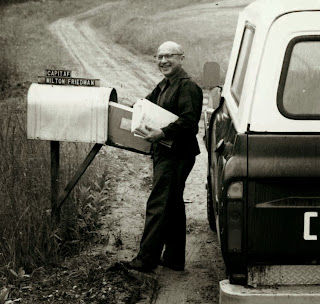 The Hoover Institution has made available (h/t Robert Leeson) online the Economics Cassette Series, which "was a 215-tape, subscription-based series produced by Instructional Dynamics Incorporated (IDI) between 1969 and 1978. The biweekly series was composed of interviews with Milton Friedman during which he commented on current economic events, and thus was a sort of companion to Friedman's Newsweek columns."

There are many interesting nuggets for those interested in the history of ideas, and in particular about the current economic problems of that period. In one of the talks he suggests that a precondition for economic growth is low inflation. Not much evidence to support that actually. The famous paper by Bruno and Easterly argued that inflation below 40% a year has no evident effect on economic growth. At any rate, you can check here his discussion of the Brazilian Miracle. For him the Military dictatorship instituted political stability (and he said that there was, at least for an external observer like, a great deal of freedom; he goes on a rant comparing Franco and the Brazilian dictatorship favorably against the Soviet Union), and tight monetary control (no discussion of the wage repression policy in explaining stabilization, but he does discuss 'monetary correction', indexation, which led to inflationary inertia, in very positive terms), and that's, to a great extent, what explains the Brazilian Miracle.

In all fairness, for him the Brazilian Miracle, and also the Japanese Miracle before that, was based on access to external technology, without the cost of developing the technology.There are other fascinating things he says, like how unemployment is caused by the high minimum wage, which was not a problem in Brazil since less people depended on the minimum wage (also evidence for that is flimsy at best; see famous study by Card and Krueger here). Note that soon Friedman's papers and almost everything he wrote will be searchable on the Hoover website.
By Matias Vernengo - December 16, 2013