The Fiscal-Military State and Western Hegemony 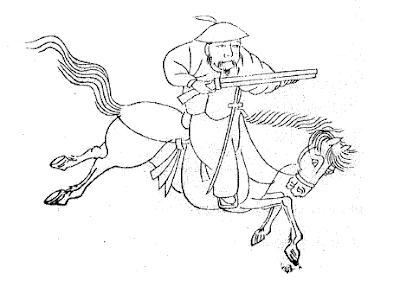 An often neglected, at least in economics, argument for the rise of the West (leaving the debate of when the Big Divergence took place, if around 1800 or before, for another post), is its fiscal advantage when compared to the Oriental Empires (Mughal, Ottoman, Safavid and Qing). Patrick O'Brien, the prominent author of the idea of Western fiscal exceptionalism, suggests that the smaller and more urbanized polities of the West found it easier to tax their populations than the Eastern empires with more extensive territories, larger populations and less urbanized economies, even if the latter were in many respects more advanced than the former. The figure below shows that to some extent the Dutch dominance, and then the English ascension, go hand in hand with and increase of tax revenue as a share of GDP. 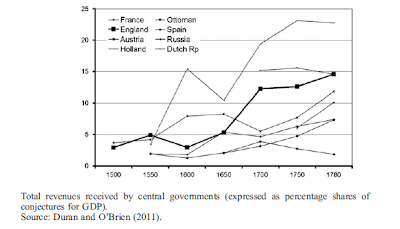 The figure shows only the Ottoman empire, at the bottom of the graph, as a comparison to the Western economies, but it gives a sense of the stark differences after the mid-17th century. In a sense, O'Brien's argument can be seen as a variation of Charles Tilly's famous argument that "War made the State, and the State made war." Inter-State wars gave a military edge to Europe, which was solidified in the higher revenues which led to larger and more organized navies in particular. In this respect, the work by Jan Glete on the effects of a permanent navy on State formation deserves also careful reading.

However, the reasons for the militaristic nature of the Western economies is not well developed in the Fiscal-Military State literature. Kenneth Chase's book on the history of firearms provides an interesting answer.


He argues that early firearms were not very effective when used against cavalry because of their overall lack of mobility, poor rates of fire, and limited accuracy. As a result, their effectiveness was restricted to infantry and siege warfare, and were not used in regions threatened by nomads (which include all the Oriental Empires), in which cavalry warfare was dominant. That is why the Chinese invented guns, but failed to keep up with Western developments. The same could be said about sailing techniques, and the combination of guns and sails, to use the terms of Cipolla's classic book.
By Matias Vernengo - November 27, 2013