Krugman is right: "Macroeconomics is all wrong"

Krugman seems to be surprised to find out that there is no direct relation between fiscal deficits and higher interest rates, and that for the most part the relation seems to be upside down. He gets everything right, including the bold claim that mainstream macro [the only one he acknowledges, even though he knows better] is all wrong. And seriously why is he surprised that crowding out does not hold water?!

It's not new that the evidence for crowding out is weak, at best. For the most part the evidence on the positive effects of fiscal policy on the level of activity has been well established (see here Eisner, and here a review by Arestis and Sawyer). Note that essentially the surprise comes from the fact that Krugman does accept the natural rate (for more on this go here).

In that case, conventional wisdom says that it must be true that if the level of output is above its natural level (or the actual unemployment rate is below the natural, or, finally, the rate of interest is below the natural) then prices would increase and eventually credit would contract (as bank reserves decrease, or as the real balances fall) leading to a higher rate of interest. The monetary rate of interest would approach the natural. So, if the evidence for that is not there, shouldn't Krugman, like Keynes [when shown that real wages were pro-cyclical he abandoned the notion of a marginal decreasing schedule demand for labor] revise his views?

Further, if one accepts the notion of endogenous money (or MMT) then it cannot be assumed that successful fiscal adjustment (lower deficits) will lead to lower interest rates, since those rates are managed by monetary authorities. Yes the Fed normally manages the short-term rates, but the long-term ones usually follow (only before recessions, and for a short while, yield curves becomes downward sloping). And if necessary the Fed can directly intervene on long rates, as it did during the Great Depression and WW-II, and now with QE.

At any rate, some more evidence that supports the notion that fiscal expansion does not affect interest rates according to what the mainstream would suggest. Below the relation of interest rates and, instead of using fiscal deficits, public debt (source here). 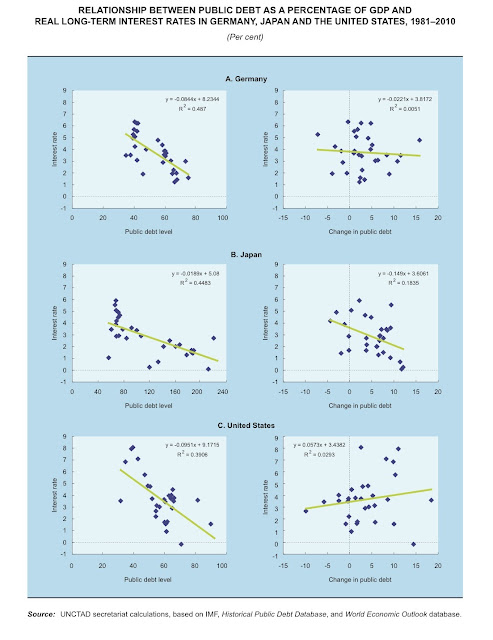 As you can see there does not seem to be a relation between higher public debt and higher rates of interest. In fact, most of the time the relation goes in the wrong direction. Yes, Krugman is right, macro is all wrong, and he should abandon his model, which would be the only coherent thing to do.