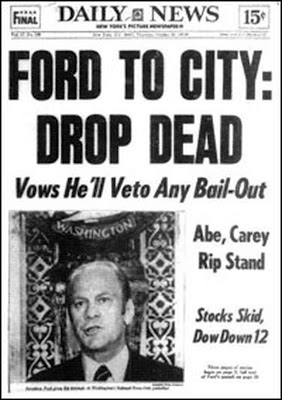 The big news this week is that Detroit filed, or tried to, for bankruptcy. Some have compared the Motor City crisis to the European, and in particular Greek, crisis. And in the essential that is fine. Detroit is, like Greece has become, a sub-unit of a larger entity and does not control monetary policy. But the analogy does not help much in understanding the difficulties in Detroit.

There is an important difference that has always been part of the discussion of the European crisis, and that is that if you are unemployed in Michigan you get Federal unemployment insurance, and a series of other federal funds support the less privileged. Fiscal transfers are relatively large, and certainly larger than intra-European transfers. According to the Tax Foundation in 2011, federal aid corresponded to 36.4% of the Michigan revenues [not the highest, by the way, which was Mississippi with 49%].

So, if it is far from clear that the European crisis [and in my view that includes the Greek crisis] was a fiscal crisis, then there is even less straightforward that the Detroit crisis is a fiscal one. In general debt crises are not fiscal, with the ones in countries for the most part being related to balance of payments problems [which can be aggravated by monetary arrangements, as in the case of the monetary union in Europe, or like Convertibility in Argentina back in 2001/2] or in the case of cities having demographic causes and the changing structure of production [Krugman noted this here, and I dealt with the case of Detroit before here].

In this sense, the deep causes of debt crises are associated to the patterns of productive specialization, which imply that they don't have enough resources to pay for essential imports (countries) and to provide for indispensable social services (cities). The important thing to note is that often there is a political objective that drives the debt crises. In the case of the Latin American debt crises of the 1980s was the push to open up the markets and force the so-called Washington Consensus policies.

In the case of Detroit there might be good reasons to think that austerians want to use the need to cut Detroit's employee pensions as an example for a future cut in benefits and privatization of Social Security. As much as the New York crisis of the mid-1970s was a harbinger of the conservative assault on the New Deal institutions brought by Reagan the Conservative Revolution, the Detroit crisis might signal things to come.
By Matias Vernengo - July 24, 2013