So again, because some didn't get the memo. How 'bad' has been Argentina's performance since the crisis in 2002? Well if you use the numbers put out by Orlando Ferreres, not the government official data, with inflation at around 25% or so, what you get is the graph below. 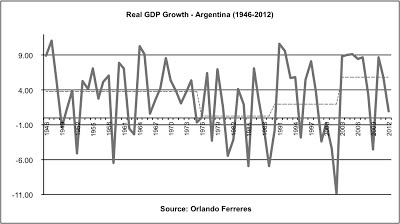 This is not say that everything is fine in Argentina. But certainly the country does not need a return to the failed policies of the Washington Consensus.
By Matias Vernengo - February 23, 2013