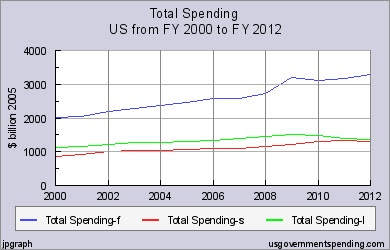 The problem is that State and Local spending has decreased (red and green), so overall the increase since the recession (2007-8) has not been particularly large. The type of spending is also relevant to understand the effects on the economy as a whole. In the Bush years the biggest expansion was on defense, while in the Obama administration welfare spending has increased the most as a result of the crisis. Mind you, spending on welfare has decreased since the beginning of the recovery, while military spending slowed down, but has still continued to increase.
By Matias Vernengo - February 10, 2013