So Krugman is again trying to make sense of his marginalist theory of distribution and the choice of technique. He suggests the following graph, which I slightly modified, to express the possibilities available to the firm. 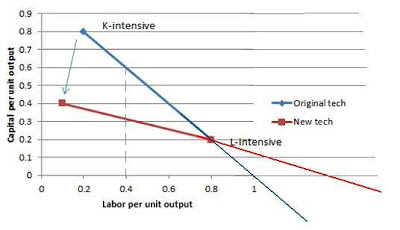 The profit maximizing firm will choose the 'labor-intensive' technique to the left of the intersection level between the two techniques. For example, at L/Y=0.4, where there is a vertical dotted line, now the firm needs less capital per unit of output (around half, approximately 0.3, rather than 0.6) to produce one unit of output. To the right of the intersection the opposite applies.

Note correctly that, as is well known by Krugman, the neoclassical theory of distribution applies here. The slope of the techniques is given by the negative of the capital to labor ratio, and relative remuneration of capital and labor are associated to the intensity of the use of the factors of production. In his words:

"and if you’re worried, yes, workers and machines are both paid their marginal product."

That is why the firm uses the labor intensive technique as real wages fall, and technical progress is associated with worsening income distribution. There is only one problem. The linear technologies of his example presume that all sectors have the same capital to labor ratio. That is a very peculiar assumption (the same needed for production prices to be determined by the amount of labor directly and indirectly incorporated in production, or what Marx referred to as the same organic composition of capital, by the way). If that proposition is dropped the whole thing is incorrect (see here).

Samuelson (1966; subscription required) was well aware of the problems brought about by the special assumption of his Surrogate Production function. It's time Krugman reads some of Samuelson's classic papers.

PS: Note that Krugman's point here is that maybe worsening income distribution was caused by technical progress, something he has been trying to deny in his recent research, suggesting that the increase in inequality was caused by political factors (conflict) and not skill biased technical change (technology). Make up your mind dude!


"There often turns out to be no unambiguous way of characterizing different processes as more 'capital-intensive,' more 'mechanized,' more 'roundabout,' except in the ex post tautological sense of being adopted at a lower interest rate and involving a higher real wage. Such a tautological labeling is shown, in the case of reswitching, to lead to inconsistent ranking between pairs of unchanged technologies, depending upon which interest rate happens to prevail in the market."

A tautology that may lead to mistakes. That's what marginalism produces when you want to understand income distribution and technical change.
By Matias Vernengo - December 26, 2012