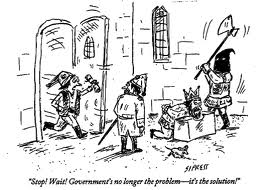 In May, Olivier Blanchard, the head of the research department at the IMF, said:


"Earlier fears of a double-dip recession—which we did not share—have not materialized... The inventory cycle is now largely over and fiscal stimulus has turned to fiscal consolidation, but private demand has, for the most part, taken the baton."

The lame excuse for this ludicrous forecast now is that:


"the initial U.S. data understated the size of the slowdown itself. Now that the numbers are in, it is clear that more was going on."

In all fairness I criticized that view in May (here) and in July (here), since it was clear that fiscal austerity (Blanchard says consolidation, but he means reduction of spending and increases in taxes, that is austerity measures, which may not lead to a reduction in deficits, i.e. consolidation; one day I'll publish the IMF-English/English-IMF Dictionary) would not work.

Now that he admits that private demand has not taken the baton you think he would admit that fiscal consolidation (austerity really) is not the solution. You would be wrong, of course. He says in the new World Economic Outlook foreword (WEO, Sept, 2011) that:

Not very different from what Christine Lagarde, his boss, has been saying. That is, we need fiscal austerity, but not too much (see my critique here). The new claim (in the last WEO) is that China has to import more, since the US private demand will not pick up (and fiscal austerity is needed).

By the way, according to the IMF China will grow 9.5% in 2011, and the yuan has appreciated strongly in real terms (particularly when you deflate by the real wage, that grows astronomically in China). So it's unclear how China could, besides growing sufficiently fast to keep a good chunk of the world economy (in particular exporters of commodities) expanding, also get the US out of its recession.

Perhaps, Blanchard and the IMF should revise their views on fiscal policy for developed countries (the IMF could also change it's adjustment programs based on austerity in Europe too!).
By Matias Vernengo - September 22, 2011