I haven't written about bitcoin in a long while, in part because it is somewhat irrelevant, like all notions of a future dominance of private currencies (another of Hayek's incredible blunders; more problems with Hayek here and here). Note that nation states are fine and well, and not going anywhere, and hence national currencies will remain dominant. Only a weak state without its own currency (El Salvador is dollarized; on that see here and here) would make bitcoins legal tender. But more on that later.

Even though it's discussed in my old post, let me first explain why bitcoin makes little sense as a currency. The first thing to note about bitcoiners is that they think that the state management of the currency is prone to abuse, and that the value of money, and, hence the price level (or its change, i.e. inflation) suffers as a result. The slow and persistent mining of bitcoins, in this view, is what leads to a stable price level. The value of money depends on its scarcity, according to some version of the Quantity Theory of Money (or if they were more sophisticated some notion of a natural rate, and that would work at full employment). Of course, that notion breaks down pretty fast, since inflation is seldom related to excess printing of money by the central bank. 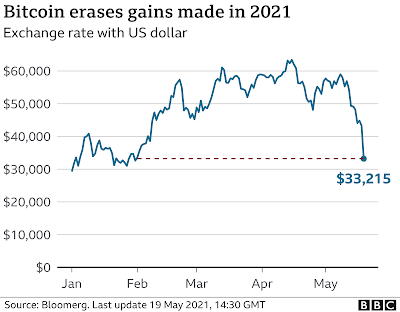 Note that the value of bitcoins has recently collapsed from about 60,000 to around 33,000. It's closer to 34,000 or so now. At any rate, to make things simpler, and rounding things up, the price has been halved, in dollars. In other words, if you bought with one bitcoin something that costed US$60,000 now you need approximately 2 bitcoins rather than one to buy the same thing. Prices doubled in bitcoins in just a few days. That's a doubling of the price level, an increase of 100%, or very high inflation in bitcoins. So inflation in bitcoins (and in any currency really) has little relation with the amount of money. Exchange rate depreciation is crucial, as well as other costs (on alternative theories of inflation see here).

In other words, bitcoin is simply an asset, as gold since it was demonetized almost 50 years ago by Nixon, with the closing of the gold window (or 1968, if you take the link to Fed notes). It is something that is purely relevant for speculation, contrary to some other financial assets that might be relevant for other uses, even industrial uses like gold. Don't get me wrong, block chain technology and digital currencies might become relevant, but that would be once national governments and central banks, which are moving slowly in that direction, decide to adopt them.

I haven't read much on Bukele's decision to make bitcoin legal tender. But the notion that this would be good for the population is crazy. Notice that if you send one bitcoin, and the value collapses before its collected and changed back to dollars, in a period in which the price is reduced by half, then the person receives half the amount of dollars. The fluctuations of asset prices could be wild, and the losses staggering. And El Salvador depends heavily on remittances from the US; something around 20 percent of GDP. The only possible relevant use for bitcoins is for illegal transactions, other than speculation in which someone can win huge amounts, while many lose their pants. Other than that, this is a decision that compounds other terrible decisions taken by previous administrations, like dollarization and entering the free trade agreement with the US.