A cross of dollars 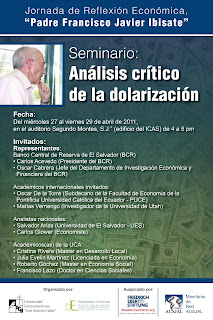 I’m off to El Salvador this week for a conference on dollarization at the Catholic University (Universidad Centroamericana José Simeón Cañas, UCA) with several members of the Central Bank, including the governor. El Salvador has been dollarized since 2001, and in this period it has grown below the Latin American average. In the 2001-10 period El Salvador grew at a rate of 2% per year while the whole region did at 3.6%. If we look at the boom period (2003-08) the respective numbers are 3.1 and 4.8%. So dollarization seems to be connected to lower growth. No surprise there.

Also, inflation has been subdued. The Consumer Price Index (CPI) has changed at 3.5% per year, for the whole period. The immediate effects of dollarization are lower inflation and lower growth. The interesting thing about the Salvadorian case is that, contrary to other experiences of exchange rate based stabilization, inflation was not very high before 2001, and it was very low, in the one digit range, throughout the dollarization. Also, real wages have fallen significantly since 2001, as shown in the figure below. 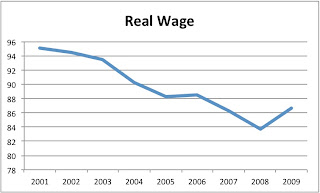 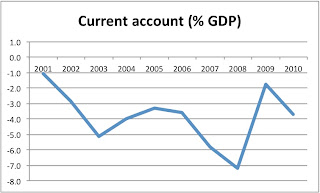 This is pretty striking, since most countries that fix the exchange rate, let alone dollarize, end up having a significant real appreciation (i.e. higher domestic costs than foreign, like in the European periphery). At any rate, even with a smaller real appreciation than otherwise (because of low real wages) the current account deficit has become increasingly larger, and only the global crisis, and the fall of GDP have provided temporary relief. It does not look sustainable in the long run.

PS: I have dealt with the Ecuadorian case somewhere else.
By Matias Vernengo - April 25, 2011