Larry Summers on the necessity of fiscal expansions 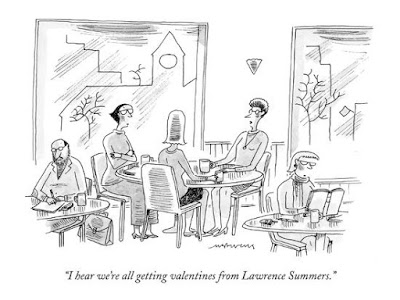 As noted before, Larry Summers argues that Post Keynesians and original Keynesians (arguably Keynes and those close to him) did not think in terms of imperfections. The op-ed version of the Tweets here. He says, on the topic of secular stagnation and the lower zero bound that:


This formulation of the secular stagnation view is closely related to the economist Thomas Palley’s recent critique of “zero lower bound economics”: negative interest rates may not remedy Keynesian unemployment. More generally, in moving toward the secular stagnation view, we have come to agree with the point long stressed by writers in the post-Keynesian (or, perhaps more accurately, original Keynesian) tradition: the role of particular frictions and rigidities in underpinning economic fluctuations should be de-emphasized relative to a more fundamental lack of aggregate demand.

The label is a bit clumsy, but the logic is perfect. And the policy conclusion is also pretty clear and in line with more progressive Dems:


What is needed are admissions of impotence, in order to spur efforts by governments to promote demand through fiscal policies and other means.

He may be angling to be Bernie Sanders Treasury Secretary, and he's doing a good job.
By Matias Vernengo - August 23, 2019