Capital Flows to the Periphery: Still ‘push’, but with significantly lower risk spreads

We have, in our new paper, gone back to the old pull-push debate on determinants of capital inflows to emerging markets, to look at the behavior of country risk premium spreads. Our Principal Component Analysis of the country-risk spread series of ten emerging economies from 1999 to 2019 revealed that 86% of the total volatility of the original series can be represented by only two components, suggesting the prevalence of common factors in determining country risk. This evidence, reinforced by the correlation of the first major component with global liquidity indicators, corroborates our hypothesis that the sovereign risk trend is driven by external factors, in line with the push literature. This is clearly shown in the graph below that shows the Evolution of the EMBI+ emerging market risk spreads against EMBI Brazil over time. 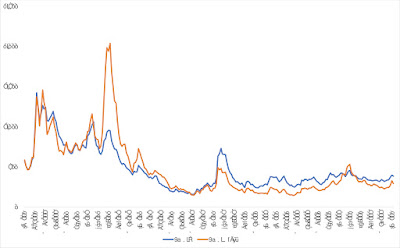 Our contribution strengthens the thesis, stressed by Medeiros (2008), about the subordination of economic cycles in developing economies to global financial cycles. This in effect imposes an (asymmetric) constraint for the management of domestic monetary policy. To avoid capital outflows and/or successive exchange rate devaluations, the domestic interest rate should not remain lower than the international reference interest rate added to its country risk premium (Serrano and Summa, 2015). This constraint has changed significantly in the 2000s.

In the recent expansionary cycle of global liquidity, many developing economies seems to have taken advantage of this window of opportunity to simultaneously grow more and reduce their external vulnerability. These two movements ended up having the combined effect of lowering the collective external fragility of the developing economies (Freitas et al., 2016; Serrano, 2013). As a result of this change, developing economies experienced a virtually unprecedented period of reduction of Balance of payments crises. As we show in the paper, and can also be clearly seen in the graph, these favorable developments led to a once for all structural break at the level of sovereign risk spreads, that have fallen significantly after 2002. This seems to be the reason why the risk spreads have not risen again to the levels prevailing in the 1990s. Although the risk spreads continued to respond to international financial indicators and have risen both during the 2008/2009 world financial crisis and also in 2014/15, when the FED threatened to raise the interest rate and began to phase down nonconventional monetary policies, developing economies are now in a much better position to deal with those changes. This is what we can read in current pattern of risk premium spreads that, although still vary in response to changes of the relevant international financial indicators, do it around a significantly lower average.

Serrano, F. 2013. Continuity and Change in the International Economic Order: Towards a Sraffian Interpretation of the Changing Trend of Commodity Prices in the 2000s, pp. 195–222, in Sraffa and the Reconstruction of Economic Theory: Volume Two, UK, Springer