Structural Change in China and India: External Sustainability and the Middle-Income Trap 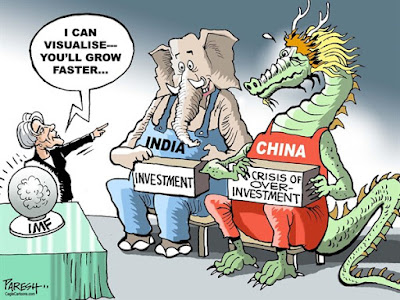 Shouldn't listen to the IMF anyway

New working paper co-authored with Suranjana Nabar-Bhaduri, and published by the Political Economy Research Institute (PERI) from UMass-Amherst. From the abstract:

This paper focuses on the different development strategies of China and India, particularly regarding the role of manufacturing and services for long-run productivity growth, external competitiveness and financial fragility. The findings appear to support the argument that productivity improvements in manufacturing drive productivity improvements in other sectors. They also substantiate previous findings that the Indian services-led growth trajectory has had limited success in transferring surplus labor from agriculture to other sectors. Furthermore, the trajectories have affected the export performances of the two countries with the Indian trade balance and current account revealing persistent deficits, compared to China's surpluses. The paper also argues that the way in which India has sought to sustain these deficits entails elements of financial fragility, and that the Chinese struggles with the internationalization of the renminbi also imply a possibility of financial instability.

Central planning (Socialism?) in democratic societies There is a lot being written on the causes and cures for the economic consequenc...