Was Keynes a Keynesian? 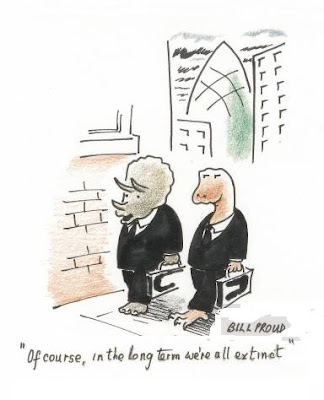 Mike Beggs wrote an interesting Review of the book In the Long Run We Are All Dead (which I started, but have not finished yet). Beggs argues that: "Marx lived long enough to declare himself 'not a Marxist.' Keynes was not so lucky. Followers would make the distinction between 'Keynesian economics' and 'the economics of Keynes.' But by then the word had well and truly transcended the man." That's not altogether correct.

Dave Colander retells the Abba Lerner story of Keynes' famous presentation at the Fed in 1943, which according to Colander might be the source for the Alan Meltzer (based on Terence Hutchison) argument that Keynes indeed did say "I am not a Keynesian," where Keynes was essentially against deficit spending, and that Evsey Domar, who was next to Lerner, "whispered: 'He ought to read the General Theory'."

Leaving aside the fact that the GT, in fact, does not deal with fiscal deficits, but more inscrutably with the socialization of investment, there is a certain amount of truth that Keynes was not always Keynesian, in the simple sense of for fiscal expansion. But that essentially puts an emphasis on Keynes' economics as essentially concerned with economic policy.

As I noted recently, Keynes arguments for public works precede the GT, and the book was published when the worst of the Great Depression was already over, clearly and expressly with a theoretical preoccupation. That is why Mann's view, which is central to his book, seems somewhat misguided. For him:

“Keynes and Keynesianism were not 'resurrected' following the financial meltdown of 2007–2008, because neither was ever 'dead,' however hard some mainstream economists might have tried to convince us otherwise. Capitalist modernity, in fact, is and always has been Keynesian on the inside.”


In his view, Keynesianism is just a name for the mechanism by which liberal capitalism tries to save itself from the contradictions that overwhelm the system in periods of crisis. And he is not wrong that Keynes is resurrected every so often (one can say the same about Minsky, now that most crisis have a financial/bubble component too).

My point is that Keynes notion that there is no unique (natural) level of employment around which the system fluctuates, and that it normally oscillates around sub-optimal levels was never actually adopted by the mainstream. What is often resurrected is the mainstream version of Keynesianism. Instead of the perennial persistence of Keynesianism, a more accurate description would be the idea that the Keynesian Revolution was really aborted.