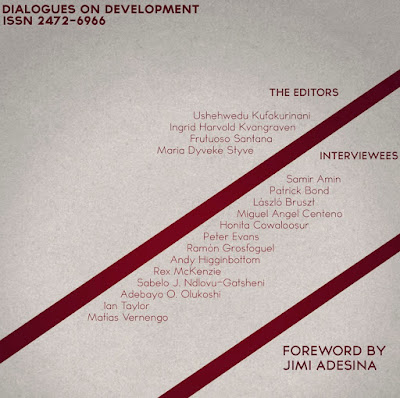 New ebook downloadable for free, titled Dialogues on Development, that was co-edited by Ingrid Kvangraven of the Developing Economics blog, has been published (h/t David Fields of URPE blog). These are interviews on dependency theory with Samir Amin, Patrick Bond, Miguel Angel Centeno, Peter Evans, Ramón Grosfoguel, among many others.

My interview, that starts in page 86, begins with this question:

To start with the most basic question, what is dependency theory?

There is no straightforward answer to this question, Vernengo notes. Although there are many studies that try to split the dependency tradition into specific schools, Vernengo tends not to regard these theoretical traditions as actual schools of thought. He prefers to broadly split them into Marxists and structuralists, and he believes that these traditions could be further split into four or five different approaches. However, Vernengo argues that also this categorisation is insufficient because even structuralists have roots in classical political economy, including Marx.

For Vernengo, dependency means understanding historical elements of development in the developing world. In his case, the object of study is Latin American economies, but he argues that the theory could as easily be applied to Asia or Africa. Vernengo admits that he might think of dependency in a slightly different way than most - as he works within a Sraffian theoretical framework. Vernengo praises the Italian economist for reviving classical political economy in a way that is both consistent and logical. To Vernengo, Sraffian economics includes the surplus approach, as well as effective demand in the long run. Within this framework, one can introduce elements of dependency in an analysis without necessarily being classified as a dependency scholar.

Thinking of himself as a Sraffian, Vernengo believes he is a classical economist with a touch of radical Keynesianism. One could say that the discussion of dependency tends to be missing among many Sraffians, but it is still perfectly compatible with the ideas of a surplus approach. Classical economics is a good starting point for understanding dependency because distribution is at the centre of the approach. Moreover, it allows for the recognition that there are extra-economic elements that impact the economy.