Brazil and the entry of China in the WTO

I have discussed here the role of Chinese growth in the decrease of US manufacturing jobs (note that I was, and still am somewhat critical about simplistic stories of deindustrialization). At any rate, for other reasons I was looking at the IMF Direction of Trade Statistics (DOTS) and ended up with the two graphs below. 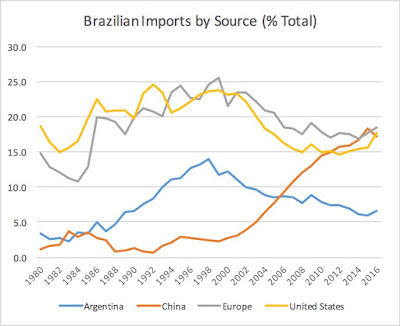 After the Chinese entry in the WTO in 2001 the rise in Brazilian imports is astounding. Now Chinese imports of manufacturing goods are about the same share as imports from the US and the European Union. 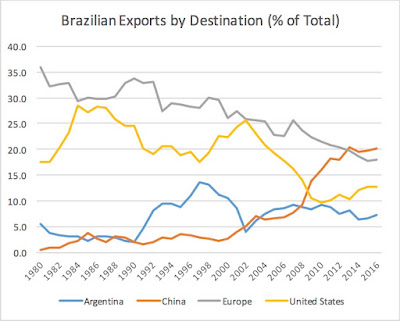 Brazilian exports to  China, on the other hand, only take off after the Global Crisis in 2008, even though an increase after 2001 is also visible. This suggests that, in spite of the slowdown in China, their relatively rapid growth has sustained the external markets for Brazilian commodities (iron ore and soybeans mostly). There is a lot to be said about the patterns of specialization that this South-South integration has shaped, and the problems that it entails for Brazil and other Latin American economies, of course. But that's for another post.
By Matias Vernengo - May 16, 2017