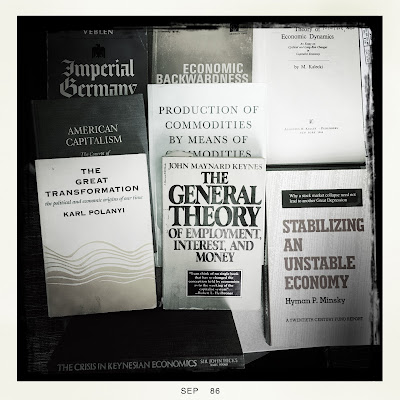 Lars Syll had a while ago a top 10 list of econ books. So here is my list of the best from the 20th century. Some are there because they are influential, some because I think they are truly the best, and all because in some way they influenced my views. The list by chronological order:

1. Imperial Germany and the Industrial Revolution (1915) by Thorsten Veblen
2. The General Theory of Employment, Interest and Money (1936) by John Maynard Keynes
3. The Great Transformation (1944) by Karl Polanyi
4. American Capitalism: The Concept of Countervailing Power (1952) by John K. Galbraith
5. The Theory of Economic Dynamics (1954) by Michal Kalecki
6. The Production of Commodities by Means of Commodities (1960) by Piero Sraffa
7. Essays in the Theory of Economic Growth (1962) by Joan Robinson
8. The Crisis in Keynesian Economics (1974) by John Hicks
9. Stabilizing and Unstable Economy (1986) by Hyman Minsky
10. An Essay on Money and Distribution (1991) by Massimo Pivetti

There are, admittedly, some odd choices. Hicks more influential book is Value and Capital, while a close contender in my view for his best book would be his A Contribution to the Theory of the Trade Cycle. But The Crisis in Keynesian Economics is his best post-Keynesian book, and I prefer it over Paul Davidson's Money and the Real World, a close contender for the list. I also almost had Gerschenkron's Economic Backwardness in Historical Perspective, but preferred Veblen's Imperial Germany, that anticipates some of the important concepts, but it's not the obvious choice regarding Veblen. I also prefer Robinson's Essays to her The Accumulation of Capital. I prefer the first of Galbraith's trilogy, rather then the last and more popular The New Industrial State. There is no book by Nicholas Kaldor, but he tended to write articles, and there is only one book that I considered including, a pamphlet on The Economic Consequences of Mrs. Thatcher, which collects his speeches at the Lords. The list also is limited to books in English. I would have had Celso Furtado's classic on Brazil, published in English as The Economic Growth of Brazil.The same could be said about Pierangelo Garegnani, whose Il Capitale nelle Teorie della Distribuzione, to my knowledge, was not published in English (I have the version in Spanish).
By Matias Vernengo - September 08, 2016