However, quantitative easing had an important portfolio rebalancing effect, which altered the relative profitabilities of different assets and made commodities an attractive investment and speculative alternative. Investing in commodities as a way to hedge risk was also championed by mainstream economists. Gorton and Rouwenhorst (2004) (here) argued that commodities and stocks yield similar returns over time so that they are adequate investment substitutes. Moreover they claimed that commodities and stocks are, in terms of levels and volatilities, either not correlated or negatively correlated over time so that investing a part of the portfolio in commodities lowers its total risk. The effect of the boom in commodities during the 2000s in Latin America is reflected in the difference between GDP and gross domestic income (GDI) (the latter is equal to GDP plus the effects of the term-of-trade which were clearly favorable in many Latin American economies. See figure 1 below for a comparison of GDP and GDI for major Latin American commodity exporters. 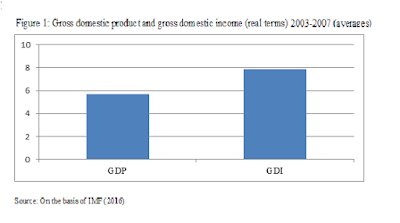 This gave a false sense of prosperity that even endured after GDP growth in most economies of the region began to decline in 2011: domestic income follows GDP but with a lag).

Low external interest rates, high commodity prices and income, and exchange rate appreciation set the stage for the large rise observed in the corporate debt following the Global Financial Crisis (2008-2009) in the larger economies of the region. The issuance of corporate debt involved some of the major firms in the region and major commodity producing firms as well the financial sector. 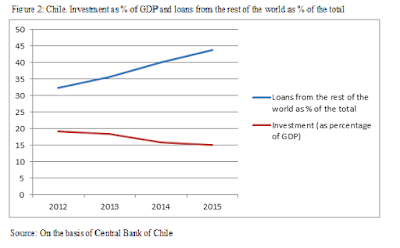 As argued by Fitch “the refinancing risk is high and default risk in climbing” (Fitch Latin American Corporate Bond maturities, February 8, 2016). Moreover, as firms have tried to cut investment, this has affected profits so that the corporate sector has increased its debt instead of deleveraging. This paradox of debt, prevalent in part of the Post Keynesian literature (See, M. Lavoie, New Foundations of Post Keynesian Economics, 2014) can be illustrated in figure 2 above with the case of Chile and may be a major stumbling block to overcome the current slowdown of some of the major Latin American economies.
By Matias Vernengo - May 09, 2016