Last weekend, as a result of Brad DeLong's post on free trade, we had a brief Twitter exchange. He had suggested that the Heckscher-Ohlin (HO) model* implies gains from trade associated to comparative advantage. He went further and suggested, after I implied that the Methuen Treaty between England and Portugal had not been favorable to the latter, that Portugal had indeed benefited greatly from free trade.

It is important to note, before we get to Portugal, that the HO model, which is a direct application of marginalist theory of value to international trade, arguing that specialization depends on relative scarcity, with countries exporting the goods that use intensively the factor of production that is abundant, is open to the capital debates critique, as shown by Ian Steedman long ago. So the HO model results lack generality, and it is NOT possible to guarantee gains of trade, as suggested by Brad. Actually, there should be no surprise that one finds paradoxes and problems, like the famous Leontief Paradox.

That does not mean that comparative advantage is conceptually wrong. The old Ricardian model does not have the problems of the HO model (Brad would have been on more solid logical grounds using this model). It is open to critiques of its use of the labor theory of value (LTV), but those can be dealt by the Sraffian reinterpretation of the LTV (for that, although not related to trade, go here). Note, however, that Ricardo's model presumes fixed levels of employment (not full employment, but given or constant) and no capital mobility. Anthony Brewer showed (subscription required) that in the Ricardian model, with capital mobility, producers would move to the country with lower costs, basically lower wages (exogenously given by classical authors), and absolute advantage would dominate trade patterns.

So what about trade between England and Portugal, you may ask. In part, the reason why Ricardo, a descendant of Portuguese jews that emigrated to Italy, the Netherlands and then to England, used the cloth-wine/England-Portugal example in his Principles, is because of the Methuen Treaty of 1703, a sort of free trade agreement. If one looks at income per capita (Table below using the Maddison data), one finds that Portugal was, by the time that follows its control of the trade routes to Asia (after Vasco da Gama reached India in 1498), slightly ahead of England, but by 1700, on the eve of the Treaty, it was considerably behind. Yet, by 1750, it seems that Portugal caugth up a bit, only to fall inexorably behind after that. By 1820, the income per capita in Portugal is less than half of the English. 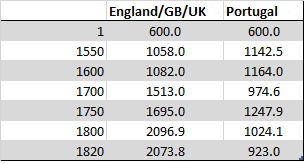 So is there any truth to Brad's view that Portugal benefited from the free trade agreement, you may ask again. The point is that, the Iberian Union (1580-1640), when Portugal was governed by Spanish kings, and the loss of the Asian Empire (but not Brazil) was behind the Portuguese long term decline, which started way before the Methuen Treaty. Guns (and sails, Carlo Cipolla would add), not comparative advantage, were behind the rise and fall of the Portuguese empire in Asia.  The Dutch and then the English would come to dominate those trade routes. And the improvement in income per capita in the 18th century in Portugal can be ascribed to the discovery of gold in Brazil (a little aside, it is the combination of Brazilian gold, the Methuen Treaty, and the infamous mistake in the pricing of silver by Sir Isaac Newton that, arguably, put England on a Gold Standard). Free trade did not explain that.

So the Methuen Treaty by itself did not cause the ruin of Portugal. But it added to the problems associated to the loss of the Asian empire, and created patterns of specialization that did not lead to further technical change and economic development. Trade matters, because what one country produces and exports matters. Complex products with higher value added are more likely to lead to the incremental innovations that are behind the wealth of nations. You may call that increasing returns or cumulative causation. Trade agreements that ossify the production structure in sectors with low levels of technological dynamism lead to lower growth, and, as in any process with path dependency, failure breeds failure. Portugal, like England, needed managed trade, not 'free' trade.

* The model is often referred to as Heckscher-Ohlin-Samuelson (HOS), since Paul Samuelson was instrumental in formalizing the HO theorem and extending some of its results. Also, less frequently the model is referred to as Heckscher-Ohlin-Vanek (HOV), as done by Brad, since Jaroslav Vanek noted that trade of goods is indirect trade of factors of production, providing further extensions to the model.
By Matias Vernengo - March 16, 2016