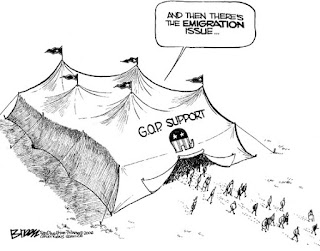 A short op-ed in the Wall Street Journal, of all places, suggests that David Card's famous work (subscription required) on the effects of Cuban immigrants on real wages in Miami was probably correct, meaning immigration does NOT depress wages or lead to higher unemployment. Peri and Yasenov's actual paper is available here (subscription is also required, I'm afraid).

I do have problems with the mainstream interpretation that real wages and employment are determined in the labor market for sure. Employment is determined by aggregate demand, as we still teach in most macroeconomic manuals, since Keynes at least lives in the short run. And real wages are not determined  by supply and demand, or by productivity and intertemporal decisions of workers. Or at least not just by that. The old classical political economy tradition suggested that supply and demand were one of the many factors that affected the bargaining power of the labor class.

At any rate, worth checking the results, in particular, in these times, in which saying that immigrants (the undocumented ones; btw, Cubans have special status in the US, I guess that's why you can have two Cuban-Americans in the GOP primaries, one particularly harsh on immigrants) are the source of all problems has become acceptable.
By Matias Vernengo - January 19, 2016