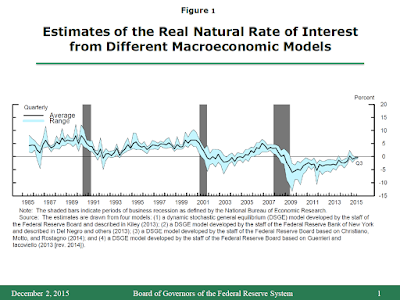 Not a conventional rate

Janet L. Yellen said in her speech at the Economic Club of Washington that rates are going to increase. Perhaps there will be no unanimous decision by the FOMC, but gradual increases should start in December. It must be noted that she did say that: "we cannot yet... declare that the labor market has reached full employment." She is also concerned with the weakness of the global economy, and, hence, of US exports. The forecast in a nutshell:


"I anticipate continued economic growth at a moderate pace that will be sufficient to generate additional increases in employment, further reductions in the remaining margins of labor market slack, and a rise in inflation to our 2 percent objective."

And that means that:


"As you know, there has been considerable focus on the first increase in the federal funds rate after nearly seven years in which that rate has been at its effective lower bound. We have tried to be as clear as possible about the considerations that will affect that decision. Of course, even after the initial increase in the federal funds rate, monetary policy will remain accommodative."

So they will increase, but slowly. On a more theoretical note, if you doubt the actual relevance of mainstream neoclassical economics for policy decisions, the whole thing is informed by what the Fed refers to as the neutral interest rate, which is according to Yellen "a concept closely related to the... 'natural' rate of interest" (Figure above shows the staffs calculations). Alan Blinder says the rate will, eventually (he says in 3 years), reach 3.5%.

I wrote too much on the problems of the concept of a natural rate of interest to repeat myself. Oh well.
By Matias Vernengo - December 02, 2015