What's in an index? Heterodox and Developing Country Journals in Economics 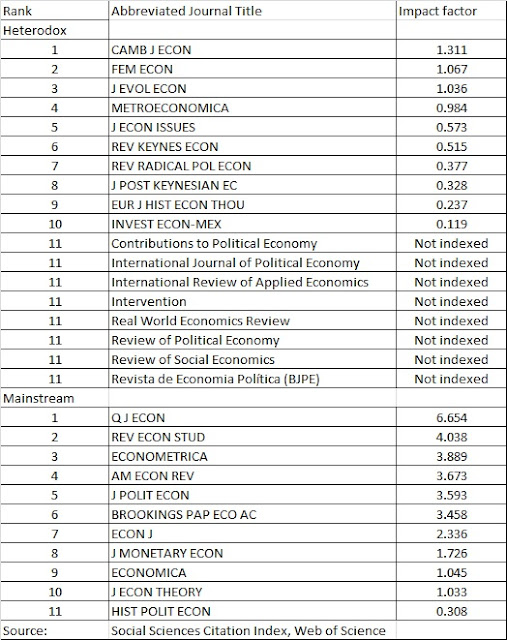 The index is calculated on the basis of the following formula (adapted from here):

The universe of of published articles (C) is what really matters for heterodox journals, it would seem. Heterodox journals would have less citations if the universe of articles involves all economic journals. The reverse would have almost no impact on mainstream journals. The late Fred Lee did some research on the bias of the conventional rankings, and built some alternative measures (subscription required). His proposal suggested separating the mainstream and heterodox fields as different disciplines.

While this solution would certainly resolve certain issues for heterodox journals, issues related to the bias in favor of journals from developed countries, and perhaps more specifically English speaking countries is not dealt in this approach. The case of  Revista de Economia Política (also known as the Brazilian Journal of Political Economy, REP or BJPE), which has been published for 35 years and is, perhaps, the leading Brazilian economics journal is illustrative in this context. The fact that REP is not indexed highlights the developed country, Anglo-Saxon bias in economics (probably true in other fields too).

Other problems occur for subdisciplines of economics that are not taken seriously by mainstream economics, like the history of ideas. For example, the History of Political Economy (HOPE) journal is not particularly heterodox (I would say mainstream is not an incorrect definition of its stance, even though it is open to and has published heterodox authors). But, as it can be seen in the table above, it ranks lower than many heterodox journals.

My concerns with a policy that separates the rankings, and makes heterodox economics a different field than mainstream economics, is that it increases the isolation of the heterodoxy, and creates the conditions to suggest that heterodox economics is not economics (there will be economics and heterodox economics). Note that rankings increasingly matter for decisions about hiring and retention. In my view, the important thing is to only use rankings with significant qualifications, and not as a the single or even the main tool to evaluate the quality of a journal.

* The list is, no doubt, incomplete. There is no way of searching for heterodox journals, so I used my memory and searched the ones that I thought relevant for the basis of this post. There is an obvious bias in the sample, but that would be about the same for the mainstream journals in the list.  For a more comprehensive list see Fred Lee's paper linked in the text.

PS: Full disclosure I'm on the board of REP and Investigación Económica (number 10 in the list above) and, also, I'm one of the founding co-editors of the Review of Keynesian Economics (ROKE; number 6 in the list).
By Matias Vernengo - September 24, 2015