Unemployment is unchanged and so is the Republican Party

So nothing new in the last report. 215k jobs created and unemployment rate at 5.3%. Below the employment to population ratio. 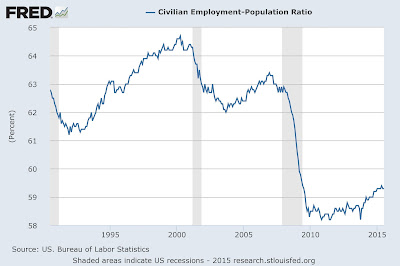 It has started to go up. But there is a long way to go. By the way, in the Republican debate I didn't hear anything different as a solution for the economic problems. Tax cuts, presumably for the wealthy (job creators is not used anymore), a flat tax and even tything instead of income taxes. Deregulation always. They are for military expansion too. And yes military Keynesianism might help the economy, but... Apparently no lesson from the 2008 Global Crisis has been incorporated into the GOP's economic discourse.
By Matias Vernengo - August 07, 2015