Martin Feldstein, chairman of the Council of Economic Advisers (CEA) during the Reagan administration, and one of the most influential economists in policy circles says that: "Market participants know that the economy is now essentially at full employment, that the consumer-price index is close to 2% and that there is little risk of deflation." 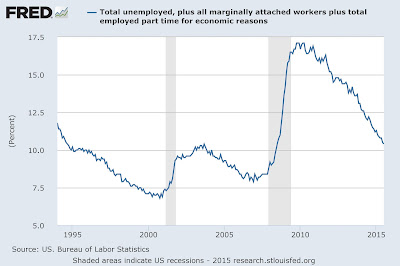 Broader measure of unemployment is at 10.4%. Then this: 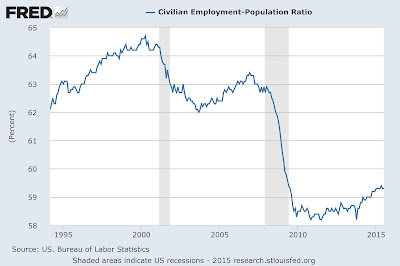 That is, the increase in employment, for the growing population, since the crisis has been almost nil. And finally this:

That is, wages have not increased much in real terms (click on figure for a better image).

Also, the deflation that matters (again) is asset deflation, not CPI, or some broad price index, deflation. Funny thing is that Feldstein thinks it's possible that asset deflation would have real effects. He says: "Much of this mispricing will likely unwind in the months ahead. What isn’t clear is whether the fall of equity prices and other corrections will have adverse systemic effects as they did in 2007-08, bringing down consumer spending and business investment and thereby reversing the recent labor-market improvement. Only time will tell."

I'm more skeptical that the effect would be big. For most consumers the effects of the Wall Street crash are irrelevant. But clearly there is no risk of inflation. In sum, not at full employment, and inflation is not really a problem, since wages are subdued. So his call for higher interest rates is hard to defend. Unless there is something else going on.

PS: Feldstein was on the board of AIG for many years, and he received a lot of money (millions?) from the company, which was at the center of the financial meltdown in 2008. He never defended regulation of financial markets. It might be a coincidence of course that his personal interests and his views are well aligned. But it would be good to know who are his clients now. I mean, just to make sure that his advise on interest rates is not biased ("Nudge, nudge. Wink, wink. Say no more").
By Matias Vernengo - August 27, 2015