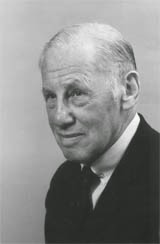 Seymour Edwin Harris was one of the pioneers of Keynesian economics in the US. He worked in the Office of Price Administration during the War, which was headed at some point by John Kenneth Galbraith, and was the chair of Harvard's Economics department. Galbraith suggests that: "President John F. Kennedy, shortly before he was killed, told of his intention of making Harris his next appointment to the Board of Governors of the Federal Reserve System." That was not meant to be.

His views on public debt show how widespread the ideas that would be labeled Functional Finance by Abba Lerner were among Keynesians in the 1940s. Most of the quotes below come from a paper on "Postwar Public Debt." The paper is in the book Postwar Economic Problems that he edited and is available here.

Note that there was no doubt that more debt was necessary to fund public investment in the post-war period. He says:


"We must not, therefore, be deterred from public invest­ment by these alarmists, if the postwar situation calls for public investment. Above all, we should assess the rising public debt in terms of the economy which must support it. There is no danger in a rising public debt which provides the income to finance it, or which grows in a developing economy."

An important point, often missed in current discussions of public debt, is that debts can be rolled over, and repayment is unnecessary. In fact, repayment might be a terrible idea and lead to deflationary forces and economic contraction.


"In answer to the contention that a permanent debt is a breach of faith, it is suggested that the obligation of the government is merely to provide the cash value of the bond on the date of maturity: the cash required may be obtained through sales of new bonds. Repayment of debt, moreover, may have deflationary effects; and the more impressed one is by the theory that our economy tends to stagnate, the more objectionable is the repayment of debt."

Further, accumulation of debt is not a problem. In an even more stark way than what Lerner would suggest later, Harris says that there might not be a clear limit to the amount of debt.


"Accumulation of debt will not bring ultimate collapse if the economy continues to grow. Tax capacity increases with the rise of income; and so long as the rise of debt charges is kept well within the limits set by a rising trend of income and capacity to pay taxes, no fears need be felt concerning a rising public debt.
...
In one sense, there is no limit to the growth of public debt, for, as debt charges rise, the taxation of holders of this debt may rise at an equal rate."

Finally, accumulation of debt does not bring the end of capitalism (one might argue the other way round, without debt, no capitalism) and the risk of inflation is minimal.

"It may be a shock to many to learn that a public debt of $4,000 billion may be carried by the economy without a collapse of the capitalist system, a repudiation of the debt, or a great inflation. Yet the arithmetic of the problem suggests this conclusion."

He later qualifies suggesting that some inflation would take place if the economy approaches full employment. Note that at this point, in 1943, the fears were that after the war the situation of the 1930s, with economies struggling with unemployment would become the norm again. The famous paper by Samuelson suggesting exactly that is in this volume too.

In essence all of his predictions were correct. Expansion of debt did not lead to the collapse of capitalism in the US, or to high inflation (which occurred in the 1970s, but for other reasons, when debt was much lower in terms of GDP than in the 1940s). In fact, the capacity to repay grew so much, that as a share of GDP debt payments dwindled.  A good lesson, other than how to use Excel, for Reinhart and Rogoff.