Kicking away the ladder too

The table below comes from Broadberry and O’Rourke's The Cambridge Economic History of Modern Europe. It shows that national control of the money supply, the monopoly of emission, is a 19th century phenomena, something we discussed with L-P. Rochon in this paper back in 2003. 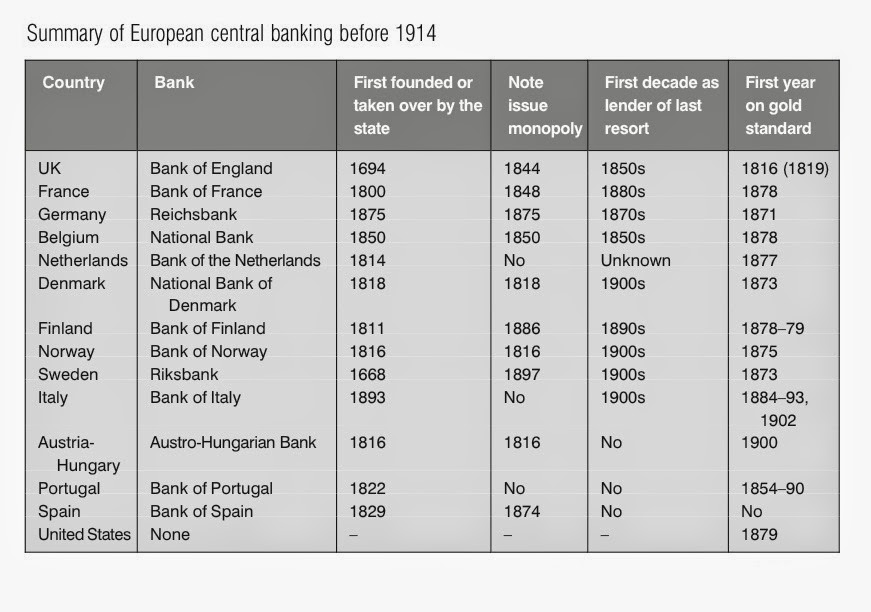 Note that before the mid-19th century period, which Charles Goodhart aptly calls the Victorian era, central banks had been created for supporting the State’s financing needs. Also, the role of lender-of-last resort (LOLR) in the late 19th century, associated to Bagehot, did not lead to a significant change in the Victorian preoccupation with price stability.

It is only with the Great Depression that the Victorian dreams of a self-adjusting economy with a tendency to full employment and an orderly division of labor, where the periphery only produced commodities and imported manufactured goods, were utterly shattered. In my view, an contrary to Goodhart, the crucial element on the rise of Keynesian Central Banks was the abandonment of Say's law, not of the Real Bills Doctrine, as we discuss here with Esteban Pérez.

I wrote a paper (in Spanish), when I was at the Central Bank of Argentina, that has not been published on these topics, titled 'Kicking Away the Ladder Too,' in obvious allusion to Ha-Joon Chang's use of List's expression. The point is that central banks were used as tools of economic development (the Bank of England for sure), but once central economies went up the ladder they kicked it, suggesting that central banks should only be concerned with inflation. Now that the Keynesian moment has passed, the mainstream has gone back to the inflation obsession.
By Matias Vernengo - October 23, 2014

Central planning (Socialism?) in democratic societies There is a lot being written on the causes and cures for the economic consequenc...