History versus equilibrium: a false dichotomy

The title comes from Joan Robinson's famous essay. However, the motivation is to clarify some comments on a previous post on what Keynes meant by unemployment equilibrium (sent to me, but not published). There is a relatively widespread notion among some post-Keynesians that neoclassical economics assumes always a single unique equilibrium, and that Keynes, or at least his closer followers like Robinson, believed in multiple equilibria. The idea is that post-Keynesians believe in an unstable, uncertain capitalist system in which full employment is only one possibility.

Beyond what one may think about equilibrium, there is no basis in the history of economic ideas for that view. Keynes was a Marshallian, and as such did believe in the notion of a single stable long run equilibrium of the system. The radical element in Keynes analysis is that such equilibrium might be suboptimal, that is, one in which resources are not fully utilized. He is very clear when he says in the General Theory that:


"it is an outstanding characteristic of the economic system in which we live that, whilst it is subject to severe fluctuations in respect of output and employment, it is not violently unstable. Indeed it seems capable of remaining in a chronic condition of sub-normal activity for a considerable period without any marked tendency either towards recovery or towards complete collapse. Moreover, the evidence indicates that full, or even approximately full, employment is of rare and short-lived occurrence. Fluctuations may start briskly but seem to wear themselves out before they have proceeded to great extremes, and an intermediate situation which is neither desperate nor satisfactory is our normal lot."

The problems associated to the negative impact of uncertainty, and failed expectations, and the institutions and conventions that are relevant in a certain historical context to minimize the effects of instability are all part of the normal operation of the economy for Keynes, and not, like in neoclassical models, superimposed on an essentially stable system. In other words, Keynes equilibrium theory is not a-historical, and hence does not require the addition of more realistic (historical?) elements to provide explanation of say why the system is stuck below full employment equilibrium.

For example, lack of demand (caused by stagnant wages and not enough fiscal stimulus) means that the US economy will the near future fluctuate around levels of unemployment that are above the previous normal levels. In the graph below (source) that is visible in a trend that was lower in the 1950s and 1960s, and goes up in the 1970s and 1980s, only to go down (as a result of a series of bubbles) in the 1990s, and, as I suggested, is likely to go up again. This trend represents the normal position to which Keynes alluded in the passage cited above. Unemployment fluctuates, but is not violently unstable (sometimes it might be; asks the Greeks). In the neoclassical model, in contrast, without imperfections, be that price rigidities or lack of information or any other kind, the system would move to full employment. That's why they often resort to change what the meaning of full employment is (the natural rate goes up; nudge, nudge; wink wink). 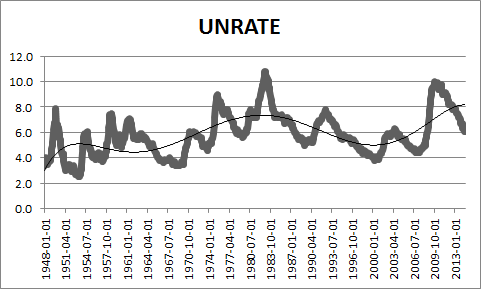 However, the interesting thing is that while the old neoclassical authors shared the classical political economists and Keynes notion of a stable long run equilibrium (optimal for the neoclassical, and not so for Keynes and the classical authors), they have departed from that view after the capital debates. In fact, it is in the Walrasian world of Arrow-Debreu's intertemporal equilibrium, that the notion of multiple equilibria becomes relevant (for the reasons why the mainstream changed their views on equilibrium go here; Garegnani classic paper titled "On a Change in the Notion of Equilibrium in Recent Work on Value" is the source of this idea). But in that world, anything could happen, it is wildly unstable and there no forces bringing the economy back to its normal position. Certainly not what Keynes thought, and also not an accurate description of the graph above.

More importantly, the very idea of long run equilibrium is central to our ability to theorize about the functioning of real, historically and institutionally specific economies. It is the fact that there are persistent forces, with regularities, which allows to say something meaningful about the functioning of the economy. If uncertainty rendered economic calculation impossible, then even Keynes' theory about how effective (autonomous) demand determines income, would be irrelevant, and in that case post-Keynesians would have (notice I said would have, since I don't think this is the right way to describe post-Keynesian economics) more in common with the modern neoclassical economists that have embraced multiple equilibria and all sorts of imperfections.
By Matias Vernengo - September 26, 2014