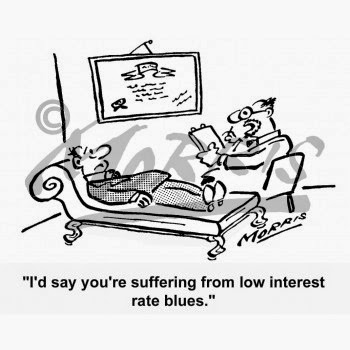 Or they need to stay low. That's what the editorial board of the NYTimes says, quite correctly in my view, after the Jackson Hole speech by Janet Yellen last Friday. Yellen is more cautious and it is not exactly clear what will happen next. She said:


Earlier this year, ... with the unemployment rate declining faster than had been anticipated and nearing the 6-1/2 percent threshold, the FOMC recast its forward guidance, stating that "in determining how long to maintain the current 0 to 1/4 percent target range for the federal funds rate, the Committee would assess progress--both realized and expected--toward its objectives of maximum employment and 2 percent inflation." As the recovery progresses, assessments of the degree of remaining slack in the labor market need to become more nuanced because of considerable uncertainty about the level of employment consistent with the Federal Reserve's dual mandate.

I'm not going to try numerology or any other dark science to foresee the future decisions of the FOMC, but it is clear that pressures for tightening are increasing.

I think overall the speech suggests slightly more weight to the dovish view, and that interest rates, at least for now, will remain low. She said:


... the decline in the unemployment rate over this period somewhat overstates the improvement in overall labor market conditions... [and]... wage inflation, as measured by several different indexes, has averaged about 2 percent, and there has been little evidence of any broad-based acceleration in either wages or compensation. Indeed, in real terms, wages have been about flat, growing less than labor productivity. This pattern of subdued real wage gains suggests that nominal compensation could rise more quickly without exerting any meaningful upward pressure on inflation.

Yes, then she cautioned that "the current very moderate wage growth could be a misleading signal of the degree of remaining slack." But that's basically to say that they will act if inflation signals appear. The interesting thing is that although the whole discussion of the risks of inflation is associated to the slack (or lack of) in the labor market, and other measures of the current level of activity vis-à-vis the optimal level (unemployment or output or GDP gap), she admits quite candidly that: "historically, slack has accounted for only a small portion of the fluctuations in inflation." It is a remarkable admission of the absence of evidence for the dominant model that orients monetary policy. The natural rate is dead, long live the natural rate!
By Matias Vernengo - August 25, 2014