Some thoughts on the Bank of the BRICS 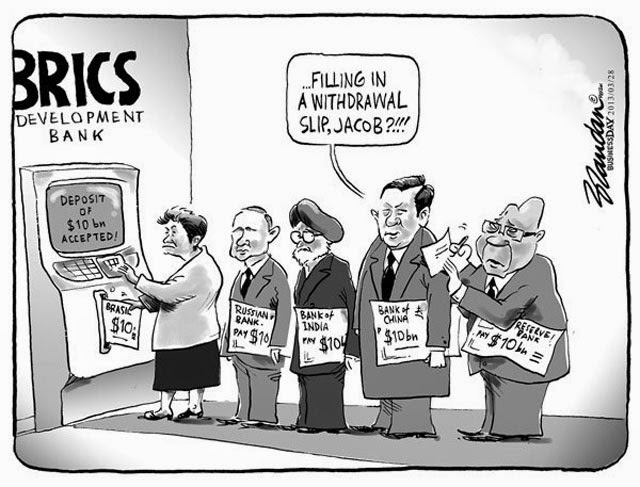 The BRICS announced in their last summit a new development bank, with US$ 100 billions in capital, of which US$ 41 billions are from China. There is a certain excitement about the possibilities for South-South cooperation and alternatives to development that this new institution will bring about. First, let me explicitly say that I think in general development banks are a relevant tool for development, that the new bank is a welcome addition that increases South-South cooperation and that reduces the need for developed country dominated institutions.

And yes a lot of the investment that will come will likely (and I would say hopefully) be on infrastructure (I say this since in one of the meetings of the Bank of the South, in Quito years ago, an activist told me I was a neoliberal for supporting infrastructure rather than community based projects; by the way, not against those, but as I said back then, if you want schools or sanitation for local communities, you'll need roads, electricity, sewer facilities and so on, which is what I mean by infrastructure). Stephany Griffith-Jones provides here the sort of defense of development banks I would agree with.

The new arrangements include a Contingent Reserve Arrangement which is more interesting than the bank itself, since it purports to provide “a self-managed contingent reserve arrangement to forestall short-term balance of payments pressures, provide mutual support and further strengthen financial stability.” In other words, not simply provide funding for development projects, but more widely to provide finance for balance of payments problems, which are at the center of developing countries problems. So, all in all, this seems to be something to be celebrated.

My two concerns are not directly connected to the new institutions. The first issue would be implementation. The Bank of the South has been in the works for almost a decade, and has been established since 2009. As I had noted here, barriers to implementation have basically meant that it is an irrelevant institution, at least so far (what I said back in 2009 was that lack of implementation might come from political differences, in the case of the Bank of the South, given its role vis-à-vis the Brazilian National Development Bank, BNDES). Note that in the case of the Bank of South it duplicated to some extent the work done by the Corporación Andina de Fomento (CAF), another regional development bank, also headquartered in Caracas. Not only it has so far failed, but in addition it has precluded the further development of existing institutions.

The second concern is regarding the type of integration between Brazil (member of the BRICS) and other Latin American countries (the same is true with some caveats for India, specialized in services, and Russia and South Africa) with China. If the new development bank is one more instrument to pursue a strategy of development in which Latin American economies specialize in commodity exports, to an increasingly manufacturing based China, then rather than solve our long-term balance of payments problems we will end building a new dependent relation, now with the Asian periphery (for more here). Hope springs eternal.
By Matias Vernengo - July 21, 2014