Reading the April World Economic Outlook (WEO), a biannual IMF publication (more to be posted soon). You can download all the data, which is always useful. Just playing around. Note that in the last decade the share of World GDP produced by advanced economies shrunk from around 80% to approximately 60%. 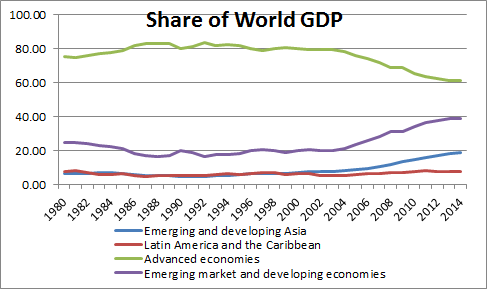 On the other hand, developing countries expanded from 20% to closer to 40% of World GDP. The fact that China might be the biggest economy in the world has been in the news recently. Note that most of this increase in the periphery is in Asia, which increased from around 7% or so, essentially the same level than Latin America, to 20%, while Latin America (which did expand in the last decade; the graph doesn't show it well because of scale) remains at the same level than 1980, recovering from the lowest point in the 1990s.
By Matias Vernengo - May 08, 2014