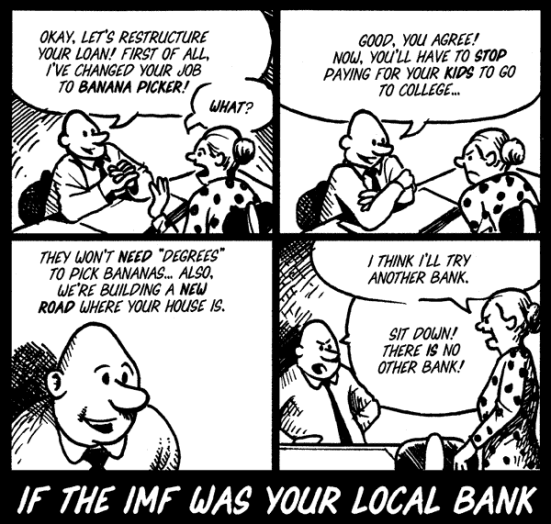 The 'new' IMF still demands devaluation and fiscal adjustment. Like the old. From their new agreement with Ukraine, according to the New York Times:


"The agreement, announced in Kiev, the Ukrainian capital, will hinge on the country taking steps to let the value of its currency float downward, to cut corruption and red tape, and, crucially, to reduce huge state subsidies for the consumption of natural gas."

This is consistent with what the IMF says in last in one of the last World Economic Outlook reports. The IMF suggests that the current risks for the global economy fall into five categories, namely (IMF, 2013a, p. 14): “(1) very low growth or stagnation in the euro area; (2) fiscal trouble in the United States or Japan; (3) less slack than expected in the advanced economies or a sudden burst of inflation; (4) risks related to unconventional monetary policy; and (5) lower potential output in key emerging market economies.” Note that even though it is suggested that stagnation in Europe is a problem, it is argued that (Ibid. p. 19): “fiscal plans for 2013 are broadly appropriate in the euro area.”

The concern with fiscal policy in the United States and Japan is that these countries (Ibid, p. 19): “need strong medium-term plans to arrest and reverse the increase in their public debt ratios,” and the Fund suggests the reform of entitlement programs as the way forward for fiscal adjustment, which would burden the old, the young and the poor more than any other social groups. The last three risks are all associated with the notion that there is a danger of rapid adjustment to full capacity and inflationary pressures resurging earlier than expected.

Moreover, there is a clear gap between the somewhat mixed message of the WEO reports in terms of what policy space allows in terms of fiscal policy and what the actual practice of the IMF has imposed on countries under agreements. Article IV consultations and Letters of Intent for the recent advanced countries that have Extended Fund Facility Arrangements with the IMF (e.g. Greece) demonstrate specific long-term structural changes that are terms of the loan. The Staff Report for the 2013 Article VI consultation for Greece suggests that (IMF, 2013b, p. 1): “Progress on fiscal adjustment has been exceptional by any standard, with the cyclically-adjusted primary balance having improved cumulatively by about 15 percent of GDP during 2010–12. Labor market reforms are helping to realign nominal wages and productivity; this internal devaluation has reduced the competitiveness gap by about half since 2010.” Fiscal adjustment and price and wage reductions are the basis of the solution, very much as in the past. If there is any change in the IMF policy advice it is difficult to find in its policies.
By Matias Vernengo - March 27, 2014